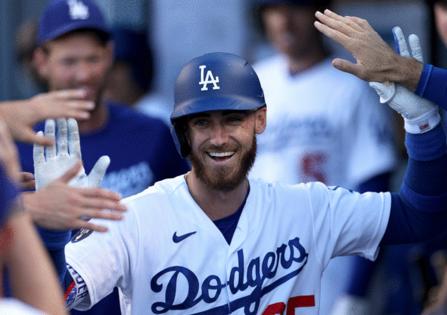 By now, the years are starting to blend together, the decade-long renaissance making one season indistinguishable from the last. October baseball is now taken for granted in this city.

The consistency shouldn't be mistaken from the lack of variety. Some Dodgers teams were better than others.

One-hundred-eight games into their season, this year's Dodgers are separating themselves from the majority of their forebears.

They casually dismissed the latest challenge mounted by the San Diego Padres, completing a three-game sweep of their visitors from Port Loser in a 4-0 victory. They remain on track to become the fifth team in the sport's history to win more than 110 games.

The Dodgers have a 15½-game lead over the Padres in the National League West. This level of dominance is unusual, even for them. So is the opportunity in front of them.

This is their year to win the World Series. This has to be their year, and not just because manager Dave Roberts has guaranteed it repeatedly.

When Andrew Friedman was handed the keys to the baseball operations department after the 2014 season, he spoke about winning multiple World Series championships.

He remains stuck at one.

As many regular-season games as the Dodgers have won under Friedman — they have a .621 winning percentage in eight seasons — they haven't claimed any more championships than they did under Fred Claire and Al Campanis.

Friedman's Dodgers have been as unpredictable in October as they have been dependable from April to September, their postseason failures threatening to make them the Stan Kasten Atlanta Braves of this generation.