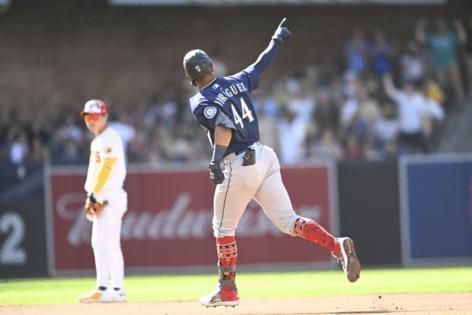 SAN DIEGO — Sean Manaea has been a good pitcher for the Padres.

He also has been a bad pitcher for the Padres.

Monday against the Mariners, the soft-throwing left-hander was the latter.

He was hit hard and hit often in a short outing, putting the punchless Padres in a hole they didn’t come close to climbing out of en route to an 8-2 loss at Petco Park.

Manaea departed with one out and the bases loaded in the fourth inning having allowed two runs in the first and two in the fourth.

Tayler Scott, in his Padres debut and first major league game since 2019, ended that inning without further damage and struck out the side in the fifth before giving up three runs (two earned) in the sixth. The Mariners added an unearned run in the eighth inning.

The Padres did about the opposite against the Mariners’ Scott Flexen, who put together 6 2/3 scoreless innings before three relievers completed the task.

Trent Grisham’s two-run homer against Tommy Million in the ninth kept the Padres from suffering their fourth shutout of the season.

Manaea was acquired in a trade with the Oakland A’s four days before the season. His arrival created a depth to the Padres’ starting rotation that is envious and has been highly effective.

The left-hander is a significant reason the Padres have among the sturdiest starting rotations in the major leagues. Entering Monday’s game, he was one of 17 pitchers in the National League to have an ERA under 3.81 and have thrown at least 85 innings. His 11 quality starts, including five among the previous six times he had taken the mound, are tied for fifth in the NL.