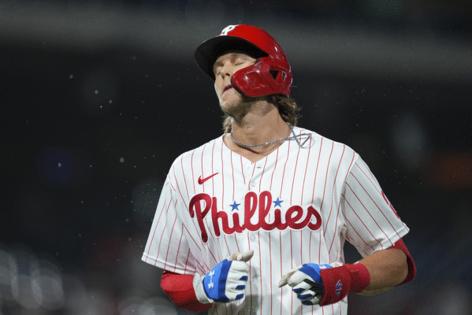 PHILADELPHIA — Nights like Wednesday — when the Phillies’ offense looked punchless in a 4-1 loss to Atlanta — could make the next six to eight weeks feel like six to eight months.

The Phils scored just one run and both of their extra-base hits were produced by the same player. Each of their three chances with runners in scoring position were fruitless and they squandered their best chance by leaving the bases loaded in the second inning.

Rhys Hoskins went 2 for 4 with a double and a homer while the rest of the lineup combined to go 2 for 27. The Phillies knew it would be a challenge to replace Bryce Harper, who had his fractured left thumb surgically repaired Wednesday morning and is expected to be out at least until the middle of August. But nights like Wednesday illustrated just how long that wait could be.

Filling the void left by Harper might not seem as daunting if Nick Castellanos was producing the way the Phillies dreamed he would when they signed him last winter. He went 0 for 4 Wednesday as his OPS dipped to .674. Castellanos is hitting just .212 this month and has not homered since May 30.

Kyle Schwarber went 0 for 4 with two strikeouts, snapping a 31-game on-base streak. It was a rare off night as he has carried the team in June with 11 homers.

The Phillies constructed a lineup that they thought would be deep enough to sustain an absence like Harper’s as they added Castellanos and Schwarber in a three-day span. But Harper’s place in the middle of the order is a glaring void.

Mickey Moniak, starting for the second straight game, went 0 for 3 with two strikeouts as he struggled to capture the success he had in spring training. Moniak had a 1.012 OPS this season over 89 minor league plate appearances but that has not translated to the majors, where he has just four hits in 31 at-bats.

Teams have shied away from challenging Moniak with fastballs as he’s struggled mightily against breaking pitches out of the zone.

“He’s getting an awful lot of breaking balls right now,” interim manager Rob Thomson said. “He has to learn to get the ball up and get it out over the plate. Use the field. They’re working on it. He just has to get comfortable. He has to get reps.”

Mark Appel, nine years after being selected first overall, received a nice ovation after making his major league debut by pitching a scoreless ninth inning. Appel was promoted to the majors last weekend in San Diego as the 30-year-old made the majors five years after he walked away. Appel quit baseball in 2017 before returning to the Phillies last year as a minor leaguer.