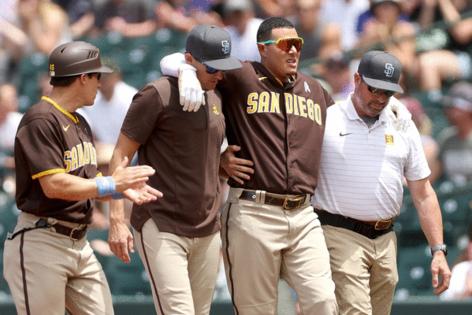 When Manny Machado rolled his left ankle, wrenching the foot sideways, dropping him in pain, it seemed the Padres' All-Star third baseman would have to go on the injured list.

Except Machado strolled into the clubhouse the next day, did some baseball work late in the week and in effect coaxed the Padres into not shelving him for 10 days.

Severe sprain notwithstanding, Machado looks headed to the batter's box during this week's six-game trip, either as a designated hitter or pinch hitter, perhaps as soon as Tuesday night against the Arizona Diamondbacks and almost certainly during the four games at Dodger Stadium.

Will he pull a Kirk Gibson, hitting a home run off one leg?

The better comparison is Ken Caminiti, the former Padres third baseman who famously warded off dehydration and wooziness in August 1996 to sock two home runs in Mexico and punctuate his MVP season.

Whether he delivers comparable theater, Machado has brought to mind Caminiti's massive season, not just for his hitting and fielding but also his grit and efforts to lift up teammates.

It was a big claim. The Padres were loaded with tough veterans, including Hall of Famers such as Tony Gwynn, Rickey Henderson and Trevor Hoffman and a steady leader in Wally Joyner.

But Lopes, a former leadoff hitter on star-studded Dodgers teams, wasn't wrong. Caminiti, intense yet friendly, policed the '96 Padres with a style that often involved little or no talking. When one frontline player loafed during a game, Caminiti promptly approached him on the dugout bench, bent in front of him, inches away, and glared at him. Message sent, he walked away. When another teammate second-guessed manager Bruce Bochy one time too many, Caminiti collected the player's street clothes and deposited them in Bochy's office.