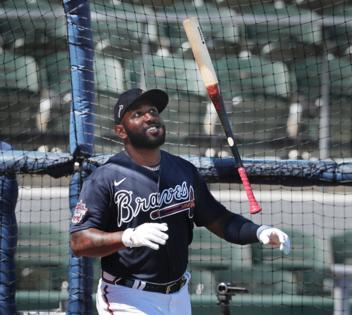 Later that night, they were reminded just how much they will miss him.

After coming back from a three-run deficit earlier in their game against the Atlanta Braves, the Dodgers’ 5-3 loss was cemented during a high-leverage sequence that, had he still been healthy, likely would have gone to Hudson.

After tying the score in the top of the eighth, the Dodgers summoned hard-throwing right-hander Brusdar Graterol out of the bullpen for the bottom half of the inning.

Two batters later, the Braves had retaken the lead, with Graterol giving up a leadoff double to Travis d’Arnaud before throwing a slider in the zone that Marcell Ozuna clobbered for a two-run home run.

Nonetheless, in an instant example of the challenge ahead for the Dodgers’ short-handed bullpen, it was also a spot that, previously, would have suited Hudson more.

Already, the Dodgers had been missing key relievers Blake Treinen and Tommy Kahnle, experienced right-handers not expected back from injuries until likely the latter third of the season.

Other depth pieces such as Danny Duffy and Victor Gonzalez aren’t expected back until at least August either.

In their absence, Hudson had ascended into the setup/fireman role, often facing the most difficult part of an opposing lineup in the latter innings to help bridge the gap to closer Craig Kimbrel in the ninth.