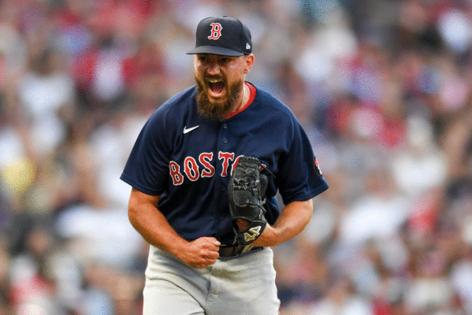 Friday night, Red Sox manager Alex Cora described Verdugo’s game as the outfielder’s best of the season. A night later, Verdugo carried the momentum into a laundry cart ride as he and the Red Sox celebrated another victory thanks to his heroics. Verdugo’s go-ahead three-run homer in the sixth inning was the difference as the Red Sox stormed back Saturday night with a 4-2 victory over the Cleveland Guardians.

The Red Sox — who improved to 18-4 in June — surged into the American League’s top wild-card spot with the victory as they clinched their seventh consecutive series win. They can sweep the series on Sunday.

Other takeaways from Saturday’s win:

— Jarren Duran could be the odd man out when Kiké Hernandez eventually returns from the injured list, but the speedy outfielder is doing everything in his power to force the Red Sox’ hand. Duran had another impressive game as he went 4 for 5 from the leadoff spot — his first career game of three or more hits — with two steals.

Duran made a bad mistake in the sixth after a leadoff double against Guardians starter Shane Bieber when he was thrown out trying to steal third with Rafael Devers at the plate that could have ruined a rally before he was bailed out by Verdugo’s homer. But that aggressiveness is also an indicator of Duran’s growing confidence as he seems to be getting more and more comfortable at the major league level. And he made up for that mistake with an RBI single in the ninth to give the Sox an insurance run.

– Josh Winckowski had another solid outing as the rookie’s confidence continued to grow. After going 6 2/3 innings against an offensively inept Tigers team, Winckowski passed a tougher challenge against the Guardians. He went 5 1/3 innings and allowed just two runs as he gave the Red Sox a chance to win again, and now owns a 2.12 ERA over 17 innings and three starts since his latest call-up — all Boston victories.

If Anibal Sanchez thought he could sneak a middle-middle sinker past Manny Machado, he was ...Read More

ATLANTA — There are times when you watch Jacob deGrom and think he may never give up a run again.

Watching him give up three runs — two in the same inning, no less — can feel like witnessing an unnatural earthly ...Read More

NEW YORK — The age-old saying in baseball is that momentum lasts only as long as the next day’s starting pitcher. Unfortunately for the Yankees, less than 24 hours after a dramatic, extra-inning walk-off grand slam, ...Read More

Though they did already win the series, the Red Sox failed to complete a sweep and notch another much-needed win against one ...Read More