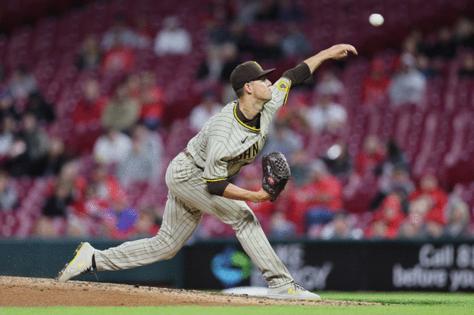 There is something, be it mechanics or fatigue, affecting the velocity of his fastball. His command continues to waver.

But Gore still shut out the potent Philadelphia Phillies offense over five innings Friday night, and the San Diego Padres went ahead in the sixth and held on for a 1-0 victory at Petco Park.

Austin Nola’s single off his brother, Aaron, drove in Eric Hosmer from second base in the sixth inning for the game’s only run.

It was the first time an MLB player got a game-winning hit off his brother since Sept. 26, 1979, when Atlanta’s Phil Niekro doubled off his brother, Joe, in the Braves’ 9-4 victory over the Houston Astros.

Nabil Crismatt (two innings), Luis Garcia and Taylor Rogers completed the shutout, with Crismatt credited with the victory. The Phillies loaded the bases on two singles and a walk before Rogers completed his major league-leading 22nd save.

Gore, whose average fastball velocity sank for a third straight start, down to 93.3 mph, had to throw almost 70 pitches over his final three innings. He got Bryce Harper on a fly ball to left field with the bases loaded in the third, stranded two runners in the fourth and ended the fifth with two on by striking out Harper and getting cleanup hitter Nick Castellanos on a fly ball to center.

Gore entered Friday having pitched 54 1/3 innings this season, four more than he threw at all levels of the minor leagues in 2021. The Padres estimate he approached the equivalent of 100 innings with the work he did at their Arizona complex correcting mechanical issues, but the 23-year-old left-hander has not pitched this much competitively since 2019.

Gore began this season with a 1.50 ERA and 57 strikeouts in his first nine games, the only pitcher to have ever done that at the start of a big-league career. In the two starts leading up to Friday, he allowed 14 runs and struck out four batters in 6 1/3 innings.

“Everybody goes through some soft spots, younger pitchers,” manager Bob Melvin said Friday afternoon. “I don’t want to say it was easy for him, but the first few were pretty good. And then you get tested a little bit. I don’t think it’s a bad thing either.”

The Padres have maintained the issue with the fastball is mechanical.

“I don’t think we’re (at) a point right now where this is a trend,” Melvin said. “Obviously, we keep an eye on it.”