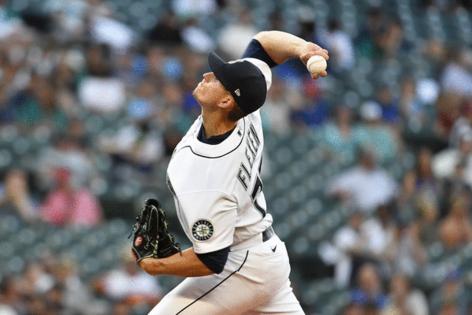 But thanks to great pitching in relief of Chris Flexen, plenty of base runners and just enough runs, it was the Mariners who were celebrating at the end.

Seattle, which lost four of five games to the Angels at T-Mobile Park a week ago, opened a three-game series with a 4-3 victory Friday night at Angels Stadium.

Seattle won its fourth straight game, all on the road after a 3-8 homestand, tying its longest winning streak of the season.

The Mariners won despite a historic homer from Trout, who had five home runs in the recent five-game series in Seattle. He hit his 53rd homer against Seattle on Friday, giving him the record all by himself for most homers by an opponent against the Mariners, pushing him past Rafael Palmeiro.

Trout also had a triple that ended Flexen’s night with no outs in the sixth, but in the end it didn’t matter.

The Mariners, who had 21 base runners in the game, didn’t take long to score the game’s first run.

Julio Rodriguez, taking injured Ty France’s spot at No. 2 in the order, had a one-out walk in the top of the first inning. Jesse Winker and Eugenio Suarez followed with singles, the latter one driving home Rodriguez for a 1-0 Mariners lead.

Justin Upton hurt his former team in the third inning, delivering a two-out single that scored Winker, who led off the inning with a double. The Angels, who released Upton in early April, are paying almost all of his $28 million contract for this season.

Upton’s hit gave the Mariners a 2-0 lead, but they left the bases loaded when Dylan Moore popped out.