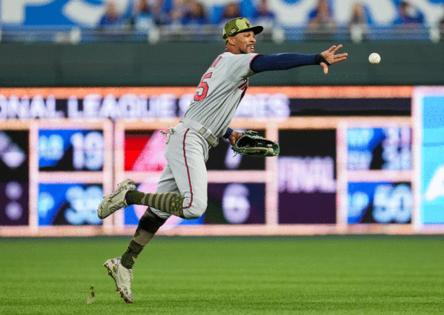 The Twins didn't have Byron Buxton, Carlos Correa or Royce Lewis in their starting lineup on Sunday. They overcame a six-run deficit to win 7-6 at Kansas City, putting them on pace to win 99 games and enrage 1 million fans.

Roughly a quarter of the way through the 2022 season, the Twins will start a homestand on Monday against Detroit at Target Field, and it seems that a large number of vocal fans will care more about the posted lineup than the final boxscore.

They want to see Buxton and Lewis in the lineup every day. Which is understandable. They are the two most spectacular athletes in the organization.

Where angry fans and the Twins bosses differ is in the assessment of downside risk.

Bettors, businesspeople and baseball bosses are obligated to assess downside risk — the chance of the return on an investment being less than expected.

The Twins plan to rest Buxton regularly, in the hope of getting 100 to 110 productive games out of him. He's playing despite patella tendinitis in his right knee. He has averaged 54 games played over the past four seasons. He requires full days off to undergo therapy and rest. His knee hurts when he swings, which means using him as a DH is not a solution.

If you are not responsible for Buxton's health, you might be willing to say, "Play him every day; see what happens." If you are in charge and your large medical staff is telling you that Buxton won't stay healthy unless he receives regular rest, you cannot in good conscience play him every day.

Lewis poses a more subtle form of risk. In his first 11 games in the majors, he hit .308 and produced an outstanding .889 OPS, while playing spectacularly at shortstop and running the bases like the second coming of Buxton.

When Correa returned from injury, the Twins had two choices: Send Lewis back to St. Paul, or move him to another position.