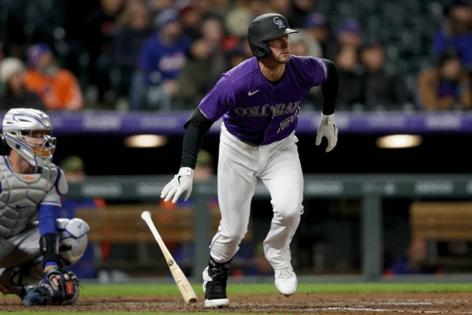 DENVER — The Mets returned to game action following a snowout to split a doubleheader in the Mile High City.

The Mets beat the Rockies, 5-1, in Game 1 of a doubleheader at Coors Field on Saturday behind 5 1/3 solid innings from Carlos Carrasco and an early outburst from the offense. The Mets matched their season-high three-game winning streak by taking the first game of the twin bill. But they badly lost the nightcap following volatile pitching performances in an 11-3 blowout to Colorado in Game 2.

Carrasco, in his Coors Field debut, lowered his season ERA to 3.50 after his 87-pitch effort that limited the Rockies to one run on seven hits. The veteran right-hander bounced back from his previous outing, when he allowed four earned runs on eight hits across 4 1/3 innings in a no-decision against the Mariners. Carrasco maneuvered traffic on the basepaths in all but one inning on Saturday, but his ability to limit the damage kept the Mets in the game.

The righty said he felt the effect of the thin air during his outing. Coors Field is famously just about one mile above sea level, which makes the air density significantly less than other major league stadiums. Carrasco said most of the pitches in his arsenal were impacted by the high-altitude ballpark, so he was relieved when the results were working in his favor.

“It’s completely different and weird,” Carrasco said. “I was out of breath over there. I was taking my time between pitches.”

Mets manager Buck Showalter said he was trying to get Carrasco to slow down his pace in between pitches to help him adjust to the air. The skipper and the rest of the Mets coaching staff warned their players before coming to Denver about the challenges of getting fatigued at Coors Field.

Trevor Williams, pitching on just three days’ rest, coughed up four earned runs in his spot start in Game 2. All four of Williams’ runs allowed came on two-run home runs to C.J. Cron in the first inning and Brian Serven in the second. Rockies catcher Serven crushed dingers off Williams and the next man out of the Mets bullpen in Adonis Medina, who stumbled badly in his fourth relief appearance of the year.

Medina surrendered five earned runs on six hits across just 1 1/3 innings in a seven-run sixth inning that broke the game open for the Rockies. Chasen Shreve, pitching in relief of Medina, failed to provide much of it. Shreve permitted two more runs on three hits before finally collecting two outs and ending the messy inning.

The Mets offense, after collecting 11 hits in an extra-inning win against the Cardinals on Thursday, picked up where it left off followed by their Friday snowout in Denver. Kickstarted by Starling Marte’s emotional first-inning home run, Mets hitters amassed 13 hits against three Colorado pitchers, including starting pitcher German Marquez, in Game 1 of the doubleheader at the hitter-friendly ballpark. After a long day of baseball, the Mets did not create many offensive opportunities in Game 2.

The Mets (27-15) have played 19 doubleheaders since the start of 2021. No other team has played more than 10 in that span. They have earned at least a split in all 19 of their twin bills over the last two years. According to Elias Sports Bureau, the club’s streak of 19 consecutive doubleheaders without being swept is the longest in Mets history. The Mets currently lead the majors by having played five doubleheaders across just the first quarter of the 2022 season.