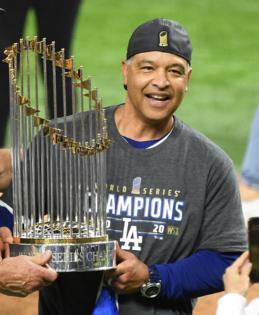 PHILADELPHIA — There was a solo home run to left and two-run double to center. A rally-extending walk and game-saving outfield assist.

Even when Mookie Betts tumbled on Saturday night — literally crashing into the dirt while rounding second base in the fifth inning — the Dodgers rejoiced, breathing a sigh of relief after their star right fielder stayed in the game despite initially clutching his left arm in pain.

The rest of Betts’ performance was anything but.

On a night the former MVP could do almost no wrong, the Dodgers overcame an early three-run deficit to beat the Philadelphia Phillies 7-4, securing their seventh straight victory in front of 32,068 at Citizens Bank Park.

Betts led the way at the plate, going three for four with a walk and three RBIs.

He produced a momentum swing on defense, throwing out a runner at home to keep the score tied in the seventh inning.

And he provided a constant spark to help the Dodgers, who trailed 4-1 after the fourth inning on a night in which they used nothing but bullpen pitchers, match their season-best winning streak and clinch a series win in Philadelphia.

“He’s just playing elite baseball right now,” Roberts said. “And we need every bit of it.”

There was a brief moment when it looked as if Betts’ big night would suffer a painful early end.