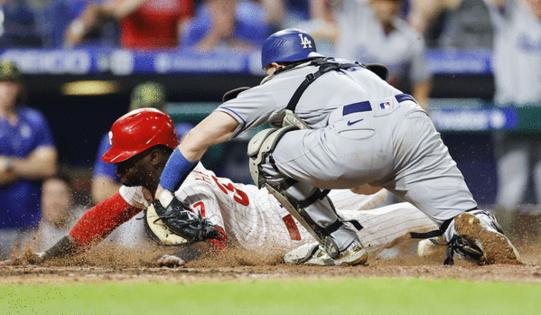 PHILADELPHIA — The Phillies scored early on Saturday, putting up more runs in their first four innings than they’d scored over their past 42, but they didn’t score enough.

The Dodgers tacked on six more runs after the fourth inning, while the Phillies were shut out after the fourth. That, coupled with a shakier and shorter performance than normal from Aaron Nola, led to a 7-4 Phillies loss, their third loss in a row. They are now 18-22 and are third in the NL East.

The narrative surrounding Nola this season has been that he’s pitched well, but hasn’t received the support from the offense and the bullpen that he needs to get wins. Initially, it seemed like Saturday night might be another one of those outings. Nola started things off with a 1-2-3 first inning, and allowed only one hit in the second inning.

Nola allowed five hits, four earned runs, a walk, and the two home runs. He did, however, strike out nine Dodgers. In five of Nola’s past eight outings, he’s gone six innings or deeper. He went 5 1/3 innings on Saturday, forcing manager Joe Girardi to turn to his bullpen a little earlier than expected.

Rocky night for the bullpen

Girardi went through five relievers: Brad Hand, Connor Brogdon, José Alvarado, Seranthony Domínguez, and Jeurys Familia. Hand was not able to record an out. Alvarado was charged with two earned runs, two hits, and a walk. Domínguez threw two wild pitches, one allowing a run to score. And Familia allowed a solo home run to Austin Barnes in the ninth. Brogdon looked solid, allowing only two hits, but other than that it was another overall subpar performance.

A moment to score that isn’t capitalized on

In the bottom of the seventh, the Phillies got their best chance to take the lead. Odúbel Herrera walked, and J.T. Realmuto was hit by a pitch, putting men on first and second. Rhys Hoskins reached first on a fielder’s choice, loading the bases for Alec Bohm with one out.

Bohm lined out to Betts in short right field, and Herrera took off for home plate. Betts bobbled the ball a little bit, but nailed the throw to catcher Will Smith. The throw had Herrera out by a mile, who slid but wasn’t even remotely close.