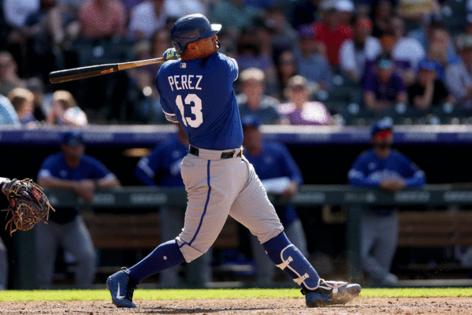 Perez, who was the designated hitter, was pulled for pinch-hitter Carlos Santana with the Royals trailing 3-0 and the bases loaded in the bottom of the seventh inning. Santana struck out and the Royals didn’t score that inning.

Between games of the doubleheader, the Royals placed Perez on the 10-day injured list and recalled catcher Sebastian Rivera from Double-A.

Rookie catcher MJ Melendez, who caught the first game, was in the posted lineup for the second game of the doubleheader.

According to Bally Sports Kansas City’s Dave Holtzman, Melendez will become the first Royals catcher to start both ends of a doubleheader since Henry Mercedes on Aug. 21, 1995 at Milwaukee.

Perez had played in all 34 games this season. He has batted .206 with a team-best six home runs and was tied for the team lead in RBIs (16).

Perez’s 48 homers were the most in a season for a primary catcher (at least 75% of games played at catcher) in major league history. He batted .273, and his .859 OPS was a career high for a full-length season, as was his .544 slugging percentage (10th-best in MLB).

He registered an OPS+ of 126. Perez surpassed the previous record of 45 homers by a catcher set by the Hall of Famer Johnny Bench in 1970. By leading the majors in both home runs and RBIs, Perez became just the second primary catcher to lead in both, the other having been Bench (1970 and ‘72).