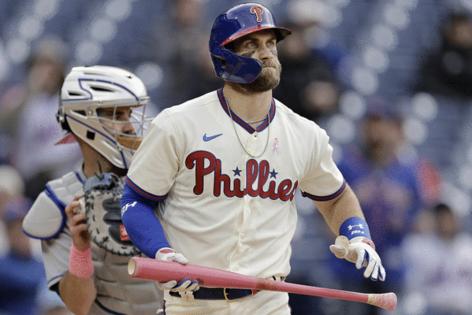 PHILADELPHIA — Bryce Harper plans to return to the Phillies’ lineup sometime this week, after his right elbow remained sore enough Tuesday from Sunday’s platelet-rich plasma injection to sideline him for a second straight game.

But a timeline for his return to right field remains in question.

“I think we have a little ways to go,” said Harper, who is limited to being used as a designated hitter as his torn right ulnar collateral ligament prohibits him from throwing but does not bother him when he swings. “When we get to that point, you guys will all know. We’ll talk about it. We’re just not there yet.”

Harper expects to be in the lineup on Wednesday or Thursday, depending on how the elbow feels. He has been instructed to not attempt to throw for four weeks after receiving the injection that is intended to repair the tear he suffered April 11.

Harper said that does not mean he’ll be playing right field in four weeks, but did say his “main goal” is to return to the field sometime this season.

“We’re not going to rush getting into that. I’m going to listen to what ElAttrache has to say and what he said,” Harper said of Los Angeles-based orthopedist Neal S. ElAttrache, whose practice administered the injection. “I’m going to take my time with it like he told me and really take advantage of the PRP shot. He has no desire to tell me that I can’t hit.”

Despite his elbow injury, Harper has been one of baseball’s hottest hitters. On Monday, he was named National League Player of the Week after hitting .609 with three homers and a 1.094 OPS over six games.

Harper’s .634 slugging percentage leads the NL, trailing only Mike Trout (.646) in all of baseball. His nine homers — all of which have come since he tore his UCL — are tied for the most in the NL and he leads the majors with 24 extra-base hits. Since Harper hurt his elbow on a throw to home plate, his OPS (1.069) trails only Trout, Manny Machado, and Aaron Judge for the highest in baseball.

Los Angeles Angels two-way star Shohei Ohtani received a PRP injection in June of 2018 after spraining his right ulnar collateral ligament and finished the season as a designated hitter but could not pitch. ElAttrache performed Tommy John surgery on Ohtani after that season and he returned to the lineup as the DH after missing the first 34 games of the 2019 season.

“I’m very lucky that it’s not my left arm,” said Harper, a left-handed batter. “... I don’t feel it when I hit. I’m very lucky with that. Like I said, as of right now, we’re just going to stick with DHing and see how I feel each day. When I’m about to throw, you guys will all know. I’ll be very open with it like I have been so you guys will definitely know.”

Scott Kingery was added Tuesday to the Triple-A roster after finishing his rehab from last July’s surgery to repair a torn labrum in his right shoulder. Kingery, who is not on the team’s 40-man roster, has played just 51 games in the majors over the last two seasons. Next season is the final year of the six-year, $24 million contract he signed before the 2018 season without having played a major league game. A natural second baseman, he was used initially as a shortstop but also at third base and in the outfield in his first four seasons.

“Our plan is to put him at second base, try to let him play one position and just get going and feel good about himself,” manager Joe Girardi said. “ ... We talked about trying to give him just one position when we met in February.”

Shortstop Didi Gregorius continues to rehab from a left knee sprain. He’s been on the injured list since May 7 … Zach Eflin started Tuesday night after being activated before the game off the COVID-19-related injured list. He took the roster spot of rookie reliever Francisco Morales, who was optioned to Triple-A on Sunday … Zack Wheeler will face left-hander Blake Snell on Wednesday and Kyle Gibson will face right-hander Yu Darvish on Thursday afternoon.