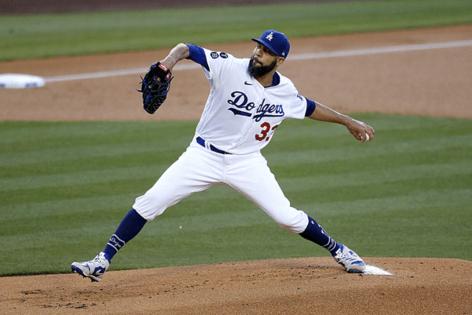 Roberts also said left-handed reliever Justin Bruihl's status for the rest of the series is questionable after he felt arm soreness trying to warm up Thursday's game.

Price, 36, appeared in 39 games for the Dodgers in the regular season, posing a 4.03 ERA. The former Cy Young Award winner mainly pitched out of a relief role, but also started 11 games.

After a bumpy beginning to the campaign — his first with the Dodgers after opting out of the 2020 season following his trade from the Boston Red Sox — Price found a groove from late April to mid-July, collecting a 2.00 ERA over 22 games.

He finished the season inconsistently, however, with a 4.60 ERA over his final 15 appearances.

Price, who hasn't appeared in a playoff game since the 2018 World Series, was on the Dodgers' roster for the National League Division Series against the San Francisco Giants, but wasn't summoned in any of the five games. He voluntarily sat out the 2020 playoffs because of COVID-19 concerns and wasn't included on the Dodgers' initial 26-man roster for the 2021 NLCS.

Now, Price might not be the only pitcher the Dodgers add for this weekend.

Bruihl is another injury concern after being unable to pitch in Game 5. Roberts said that the 24-year-old would be evaluated by trainers Friday afternoon and that the team would bring an extra pitcher to Atlanta in case Bruihl needs to be replaced.

Roberts didn't say who that extra arm might be but left open the possibility of either a left- or right-hander.

As one of two left-handers in the bullpen, Bruihl has pitched well for the Dodgers in the NLCS, providing two scoreless innings across three outings with five strikeouts.

The rookie only made his MLB debut in August but had a 2.89 ERA in 21 games to finish the season.

Kelly's postseason is also officially over now that he has been taken off the team's active roster (MLB rules require players removed from a playoff roster by injury to also miss their team's subsequent series, if they advance).

After finishing the regular season with a 2.86 ERA, Kelly had given up only one run in his first 4 2/3 innings in the playoffs before Freddie Freeman hit a two-run homer against him in the first inning Thursday. Kelly, who will be a free agent this winter, left the game with a trainer a few batters later.

Rachel Balkovec is getting used to being first.

Eight years ago, she was the first woman to work as a full-time strength and conditioning coach in baseball’s minor or major leagues.

Two years ago, she was the first ...Read More