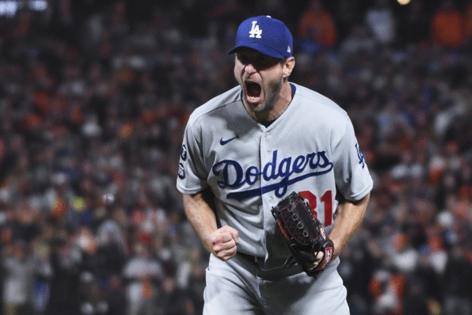 But Roberts told reporters in a video call Friday evening that the Dodgers didn’t know who will start Game 1 of the NL Championship Series for them Saturday night. Roberts said it will either be Max Scherzer or a reliever as part of a bullpen game.

Scherzer threw 13 pitches in the ninth inning Thursday night to close out the Giants for his first career save. Roberts said the decision will come down to how Scherzer feels. It’s unlikely that the fiery Scherzer will say he’s not ready to pitch Saturday.

“He’s gonna go out there, play catch and get treatment, and if he says he’s good enough and feels like he can take down a start, then he’ll be our Game 1 starter,” Roberts said.

Roberts said Tony Gonsolin would be featured, perhaps, heavily, Saturday if the Dodgers go with a bullpen game. Gonsolin didn’t pitch in the NLDS. He hasn’t appeared in a game since Sept. 30, more than two weeks ago. To stay sharp, Gonsolin threw a live batting practice session during the Dodgers’ workout Tuesday in San Francisco. He posted a 3.23 ERA in 55 2/3 innings this season.

Right-hander Evan Phillips and left-hander Justin Bruihl are candidates to add to the bullpen. Phillips provides a multiple-inning option, while Bruihl is a better counter for left-handed hitters Freddie Freeman, Joc Pederson and Eddie Rosario.

ON THE OTHER END OF ‘JOCTOBER’