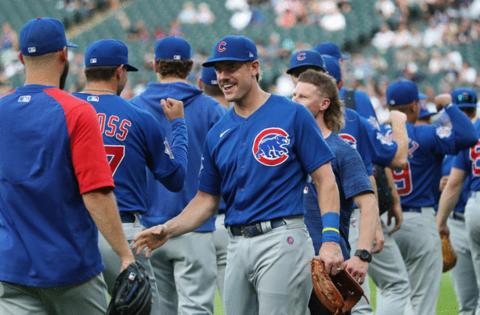 MILWAUKEE — The baseball rolled along the ledge of the batter’s eye before settling just beyond the 400-foot marker on the center-field wall at American Family Field.

During the final two innings of the Chicago Cubs’ 6-4 win Sunday against the Milwaukee Brewers, the home run ball remained a visual reminder of Patrick Wisdom’s history-making moment in the top of the eighth.

The Cubs offense hadn’t done much, managing only two hits through seven innings. The stage was set for Wisdom, though, after Willson Contreras’ 14-pitch walk and back-to-back first-pitch RBI doubles from Matt Duffy and Frank Schwindel put the Cubs ahead 3-2.

Wisdom entered the at-bat with seven consecutive strikeouts but got ahead in the count against Brewers right-hander Jandel Gustave. When he saw a sinker down in the zone, he hammered the ball over the center-field wall for a three-run homer that set a Cubs rookie home run record. His 27th of the season broke a tie with Kris Bryant (26 in 2015).

“The one thing that I love about Patrick is that he just keeps having his at-bats,” manager David Ross said. “It hadn’t been the best series for him offensively, a lot of swing and miss in there, and he continues to be that threat.

“And that’s what he brings. He plays good defense. He’s versatile. He’s got real thump in the bat, and the fact he breaks the rookie record for this organization with some really talented players that have been here and in that fashion was awesome. We needed it. He needed it.”

The 30-year-old Wisdom accomplished the feat despite not getting called up until May 25. Wisdom’s home run rate puts him in rare company. If he has 36 or fewer plate appearances during the Cubs’ last 12 games, he would become only the 13th player in MLB history to hit at least 27 homers in 390 PAs or fewer.

“It’s a life thing too; it isn’t necessarily baseball,” Wisdom said. “You’re going to get knocked down plenty of times and you’ve just got to get back up and keep moving forward. And then you come out stronger on the other end and you can look back and be like: ‘I got through those times. I can make it through this next obstacle that’s in front of me.’

“Being resilient in your mindset and your mental fortitude can take you a long ways to get you over any obstacle in front of you.”

Sunday’s milestone home run was extra special for Wisdom: His wife and two daughters were at the game. He hoped to get the home run ball back and authenticated. A member of the Brewers grounds crew brought out a ladder after the game to retrieve the ball.