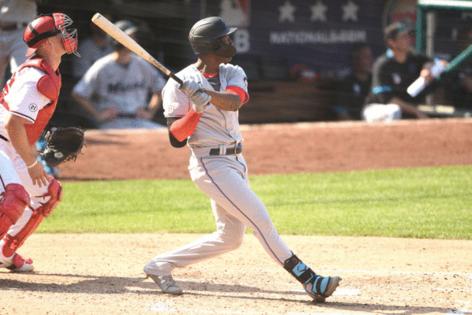 WASHINGTON — The Miami Marlins’ series finale against the Washington Nationals on Wednesday, a back-and-forth game that ended in an 8-6 Marlins win at Nationals Park, was yet another showcase of two budding outfielders attempting to show they can be critical pieces of the club’s future.

Jesus Sanchez hit a pair of two-run home runs, the first scoring the Marlins’ first runs of the game and the second giving Miami (62-84) its first lead of the game in the ninth. Bryan De La Cruz belted out a home run of his own, reached base safely three times and scored on both of Sanchez’s home runs.

Sanchez hit his 11th home run of the season — and fourth of this six-game road trip — in the sixth inning. He sent an Alberto Baldonado slider a projected 401 feet to left-center field. It was just Sanchez’s second home run off a breaking pitch this season and for the moment tied the game at 2-2.

He then secured the lead in the ninth by sending a first-pitch sinker from Kyle Finnegan 401 feet and into the Marlins’ bullpen in left-center for home run No. 12.

Sanchez has nine home runs and 22 RBI in the last 27 games since returning from the injured list.

De La Cruz, acquired from the Houston Astros in the Yimi Garcia trade, hit a 388-foot home run of his own to left-center in the eighth to cut Miami’s deficit to 5-4. He also hit a game-tying RBI fielder’s choice in the ninth before Sanchez’s go-ahead home run.

It was De La Cruz’s fifth home run of the season and the third time he reached base on Wednesday after walking in the fourth and sixth. Since making his MLB debut on July 30, the 24-year-old has a .338 batting average.

Like Lewin Diaz, who hit two home runs on Tuesday and is looking more comfortable with an extended look at the MLB level, the progression of Sanchez and De La Cruz as hitters is a key development the Marlins organization is watching over the final three weeks of the season.

ANOTHER ROUGH ONE FOR ROGERS

Left-handed pitcher Trevor Rogers had another short outing and showed signs of fatigue as he works his final handful of starts of the 2021 season after missing a month while tending to family medical emergencies.