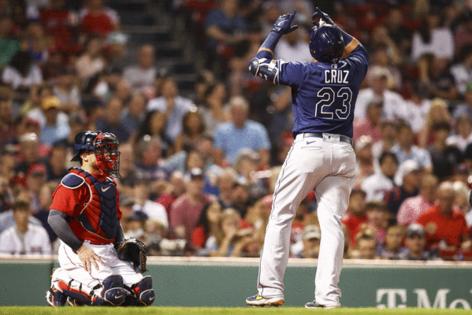 BOSTON — Unlike many other working folks from up north, Nelson Cruz didn’t move to Florida to retire.

The Rays brought him in to do a job, to help lead them deep into the postseason, and as he delivers big hits, they get to be part of the history he is making.

The 41-year-old DH went deep twice in Tuesday’s 12-7 win over the Red Sox, becoming the oldest player to reach the 30-homer plateau in major-league history, surpassing Boston’s David Ortiz and Detroit’s Darrell Evans, who did it as 40-year-olds.

Cruz was one of several Rays to have a big night.

— Wander Franco — drawing a walk his fourth time up — extended his on-base streak to 37 games, breaking a tie with Mickey Mantle for second all-time among players 20 and younger. He is now chasing Frank Robinson’s record of 43 set in 1956. Franco also has the longest on-base streak of any rookie shortstop, dating to 1958, when the league first defined rookie status.

— Mike Zunino also hit two homers — giving him 29 for the season — and a triple, on what could have been a inside-the-park homer.

— Jordan Luplow had a single, double and homer, finishing a triple short of the cycle, the ninth Ray this season to come up one short.

The Rays, meanwhile, improved their American League-best record to 88-51 and have a 9 ½-game East division lead over the Yankees.

Cruz hit 19 homers in 85 games with the Twins before the July 22 trade, and now has 11 in 36 games for the Rays. For his career, Cruz has 447 home runs, two shy of matching Jeff Bagwell and Vlad Guerrero for 40th place all-time.

The Rays brought in David Hess to pitch the eighth, the franchise-record tying 57th player they have used this season.

They’ve given us no reason to believe otherwise for the past 11 months. Rather than addressing their real culture problem in a candid and direct ...Read More