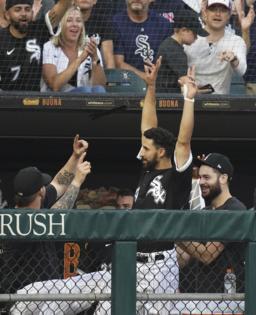 The curtain call came after Zavala had just hit a grand slam, his second of three homers Saturday against the Cleveland Indians.

“I thought they were messing around with me, to be honest, and then kind of stepped up a little bit and saw the fans going crazy,” Zavala said.

Zavala had a night to remember. According to Elias, he became the first player in major-league history to hit his first home run as part of a three home run night.

Zavala went 4-for-4 with the three home runs, a single and six RBIs. But the Indians also had some impressive hitting, topping the Sox 12-11 in front of 35,866 fans.

“I always knew I could swing it,” Zavala said. “But going through a rough patch for a couple of months. I knew if I kept working something would click and I feel pretty good at the plate. Even this past week, I didn’t do much at the plate but I’ve been feeling pretty good and I was able to get some pitches today and not miss them.

“I wish we could have came out with the win. It feels good. I was able to put some runs across the board. We battled to the very last second. We didn’t win, but we fought hard.”

The four hits and six RBIs were career highs. He entered Saturday’s game 4-for-28 with one RBI in 12 games this season.

He became the 17th player (18th time) in Sox history to hit three-plus home runs in a game, the first since Jose Abreu on Aug. 22, 2020, against the Chicago Cubs at Wrigley Field.