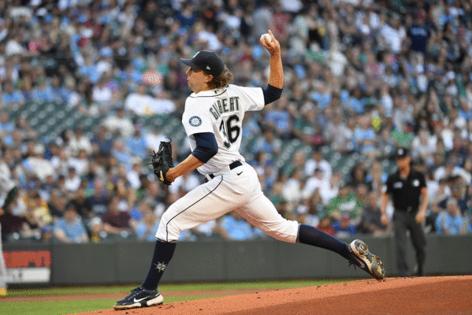 But something is definitely going on T-Mobile Park that makes one wonder if something special might be happening with a team that continues to exceed expectations.

For the second straight night, the Seattle Mariners’ winning run came when an Oakland A’s reliever couldn’t throw a pitch close enough to be caught by the catcher.

With two outs and the bases loaded, A’s closer Lou Trivino had the unenviable task of facing Mitch Haniger, who had a double and two homers on the night.

But Haniger never got a chance for a walk-off blast for his third homer of the night. Instead, Trivino’s first pitch curveball bounced about a foot in front of the plate and catcher Aramis Garcia had no chance of blocking it. It rolled to the screen and Jarred Kelenic sprinted home as an already-standing crowd of 30,843 roared as he stomped on home plate and was hit in the face by some baby power from his teammates as the celebrated a stunning 5-4 win.

With the win, the Mariners have now won two of three in this all-important four-game series.

Haniger was part of all four runs that the Mariners scored off of A’s starter Chris Bassitt.

In the first inning, he ripped a double off the BECU sign on the wall in deep left-center just in front of the mass of well-served and unwatching fans in ‘The Pen. The ball was hit so well that the person operating the fireworks behind the left field upper deck fired off the celebratory fireworks in a premature celebration. Haniger would later score on a single to right field from Ty France.

In the second inning, Haniger cut the A’s lead to 3-2, launching a deep fly ball to the exact same spot. This time the ball carried into the stands with a collection of those fans in The ‘Pen actually watching the game disrupting Ramon Laureano’s attempt at a homer-robbing catch.