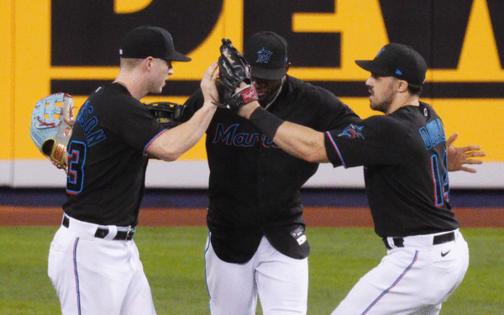 MIAMI — Jazz Chisholm Jr. woke up Friday, decided he needed to dye his hair purple to honor Kobe Bryant and then he outdueled Ronald Acuna Jr. to lift the Miami Marlins to one of their best wins of the first half of the 2021 MLB season.

It was just another day for one of the brightest young stars in baseball.

He led off for the Marlins and Acuna led off for the Atlanta Braves, and, for nine innings, they traded blows in an early-season meeting between playoff hopefuls. It was as close as the sport can get to a 1-on-1 showdown. Acuna put the Braves ahead and Chisholm answered with a game-tying hit. Acuna put Atlanta ahead again and Chisholm answered with a go-ahead hit. In the end, Chisholm, 23, had the upper hand with a 4-3 win.

The middle infielder went 2 for 3 with a walk and two RBIs, and twice helped the Marlins battle back from early deficits before delivering the game-winning hit in the fourth inning.

Acuna, also 23 and the early-season frontrunner for the National League Most Valuable Player Award, was spectacular with two hits, a walk, two runs and an RBI double. Chisholm, a contender for the NL Rookie of the Year Award, matched him blow for blow to get a series-opening win in front of 6,595 at loanDepot park.

Miami’s win to start a three-game series against the Braves guarantees at least a .500 homestand. After the Marlins lost eight of nine on their most recent road trip, they returned home Tuesday and took two of three from the Colorado Rockies for their first series win in more than two weeks. Now they’re back on track with three wins in four games to remain seven games behind the first-place New York Mets in the NL East.

It is too early in the year — and Miami still too injured — for any series, even one against a fierce rival in a division race with five teams separated by merely seven games, to mean all too much. The Marlins have 99 games left in their season, including 55 more against divisional opponents and 14 against Atlanta.

They’re also trying to make sure the race doesn’t get too far away from them, though. The “nightmare” road trip, as manager Don Mattingly termed it, temporarily plunged Miami into the NL East cellar after they began the trip just three games out of first place. The Braves, whom Mattingly constantly refers to as “measuring stick” in the NL East, sit in third place, five back of the Mets and just two ahead of the fourth-place Marlins.

Atlanta is the class of the division, in Mattingly’s opinion, mostly because it’s the two-time defending champion, but it’s also rife with some of the Majors’ biggest stars. Acuna is the MVP favorite and star first baseman Freddie Freeman won the award last year. Second baseman Ozzie Albies is on track to go to his second MLB All-Star Game and slugging third baseman Austin Riley could go to his first. Charlie Morton, the Braves’ starting pitcher Friday, was an All-Star in 2018 and 2019, and Max Fried, their probable starting pitcher for Saturday, finished fifth in NL Cy Young Award voting last season.

Chisholm, though, was as productive a hitter as there was on the field and starting pitcher Sandy Alcantara outdueled Morton on the mound.

Morton lasted just four innings before Miami chased him from the game. Alcantara pitched six. Morton gave up four runs on four hits and four walks. Alcantara held Atlanta to one run in the top of the first, another in the top of the second and then nothing else -- a two-run, five-hit outing with six strikeouts to give the Marlins back-to-back wins for the first time in nearly three weeks.

Acuna, though, landed the first blow by drawing a five-pitch walk from Alcantara to lead off the game. The superstar outfielder, then stole second base, went to third on a groundout by Freeman and scored when Albies lashed a single into right field to put the Braves ahead 1-0.

A few minutes later, Chisholm countered with a leadoff single against an 0-2 count. Miami eventually loaded the bases and outfielder Adam Duval tied the game 1-1 on a sacrifice fly to right.

Acuna and Albies put Atlanta back ahead in the seventh, when Acuna ripped a one-out double to left field and scored on another double by Albies, but the the Marlins answered back with three in the fourth to jump ahead of the Braves for good.

It started with the bottom of the order. Isan Diaz drew a one-out walk and catcher Jorge Alfaro got hit by a pitch to move the utility infielder into scoring position, then utility player Jon Berti tied the game on a single to left.

The lineup turned over after Alcantara struck out, which meant Chisholm came back to the plate with the go-ahead run in scoring position. He took a fastball over the heart of the plate and Morton tested him again. On the second look, Chisholm shortened his swing and sliced a single the opposite way, into left field against the Braves’ shift, to send Alfaro and Berti home, and give Miami a 4-2 lead.

Chisholm’s hitting streak now stands at five games, and he’s 9 of 21 with a .458 on-base percentage and .619 slugging percentage in those five games.