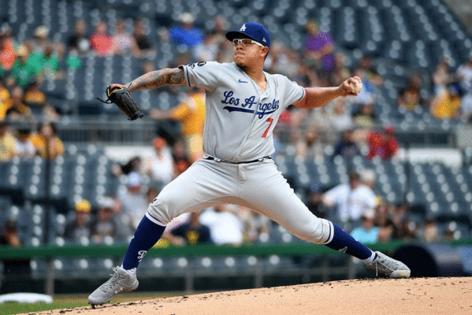 PITTSBURGH — Mookie Betts’ performance Thursday at PNC Park, an all-around rendition that served as a reminder of his elite skill-set during a relatively disappointing season, began in the first inning, when it was still sunny and muggy, inside the batter’s box.

He swatted the third pitch of the game, a 2-0 fastball from Mitch Keller, over the wall in left-center field to give the Los Angeles Dodgers a prompt lead in a rain-shortened, series-sweeping 6-3 win over the Pittsburgh Pirates. It was Betts’ sixth home run this season and first in 75 plate appearances. He hadn’t homered since May 18. On Sunday, Dodgers manager Dave Roberts predicted Betts would homer “in the next few days.”

“I’ve been working a lot, as always,” said Betts, who finished two for four with a walk. “I feel like I’ve been pretty close here lately and I’ve been hitting the ball harder more consistently. I don’t know about a home run, but I do feel like I’m swinging the bat a little bit better.”

Betts then took his act to right field. It was bumpy initially. He fumbled a hit from Erik Gonzalez in the second inning that allowed Phillip Evans to score from first base, just beating his throw, to tie the score. Betts quickly rebounded.

After a wild pitch moved Gonzalez to third base, Ka’i Tom hit a line drive to right field. Betts sprinted forward to catch the ball below his knee. He casually spun and fired a precise throw home. Gonzalez, tagging up, couldn’t avoid Austin Barnes’ tag with a headfirst slide. Betts, with the 21-foot Clemente Wall behind him, nonchalantly put up two fingers once the Roberto Clemente-esque play was complete. Two outs.

The highlight made things easier for Julio Urias. The left-hander held the Pirates to three runs on six hits over six innings. At the plate, he made the Pirates (23-38) pay for walking Barnes ahead of him to load the bases with two outs in the third inning, stroking a two-run single to right field.

The hit gave the Dodgers (37-25) a three-run lead and Urias seven RBIs this season.

“I just try to do my job,” Urías said. “I like to hit. I’m not going to deny it. I’ve liked to hit since I was little. Obviously, now we focus on pitching but when we’re there and we have runners to drive in, I try to put on a good swing and have the ball fall somewhere.”

Keller was pulled after Urias’ blow. The right-hander yielded four runs in 2 2/3 innings, giving way to the bullpen, the only strength for a club toiling in last place with the worst run differential in the majors. Five Pirates relievers combined to give up two runs over the next 4 2/3 innings until the game was stopped with one out in the top of the eighth.

Kyle Crick was on the mound facing Albert Pujols as rain flooded the ballpark when plate umpire Dan Iassogna called over a member of the grounds crew for a weather update. The grounds crew member showed him the forecast on a phone. Iassogna then signaled to pause the game.

It never restarted. The game was called 1 hour 15 minutes later, giving the Dodgers a three-game series sweep and their 13th straight win over the Pirates. They left for Los Angeles in second place behind the San Francisco Giants. Next up: a three-game series against the Texas Rangers, another last-place club, beginning Friday at Dodger Stadium.

Betts will enter with a .255 batting average and an .813 on-base-plus-slugging percentage this season. Both are significant dropoffs from his career norm. The Dodgers hope Thursday was the start of a turnaround.

“All it takes is a little hot streak,” Roberts said, “and then all the numbers are corrected.”

MINNEAPOLIS -- Just when it looked like the Yankees were going to earn another victory over the Twins, Josh Donaldson and Nelson Cruz struck,

It became the unofficial Braves motto soon after they lost to the Dodgers in Game 7 of the National League Championship Series. They were 12 Outs Away from going to the World Series. They’d get another shot in 2021 ...Read More

They received another challenge Thursday after placing second baseman Nick Madrigal on the 60-day injured list with a proximal tear of his right hamstring...Read More