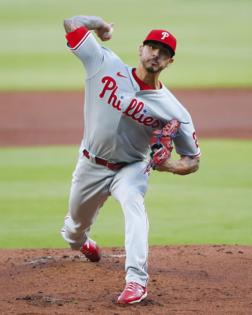 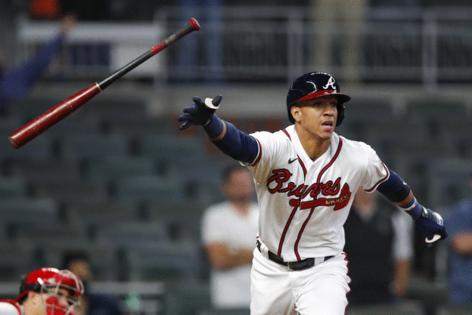 Héctor Neris was one strike away from giving the Phillies their longest winning streak in nearly three years. Then he made one of the worst pitches of his career.

And that wasn’t even the low point of the Phillies’ Saturday night in Atlanta.

The Phillies lost not one but two three-run leads in an 8-7, 12-inning crusher against the Braves, evening the three-game series with Aaron Nola slated to pitch the finale on Sunday Night Baseball. It snapped the Phillies’ five-game winning streak. They haven’t won six in a row since June 30-July 7, 2018.

After taking a 7-4 lead on a throwing error by Braves reliever Jacob Webb and an RBI single by J.T. Realmuto, the Phillies watched relievers Enyel De Los Santos and Matt Moore — unlikely heroes of a victory over the Milwaukee Brewers at home last week — cough it up in the bottom of the 12th.

De Los Santos loaded the bases and gave up a game-tying, three-run double to William Contreras. Moore came on and gave up a walk-off single to right field by Ehire Adrianza.

It never would’ve come to that if Neris had made a better two-strike pitch with two outs in the ninth inning. Instead, he threw a belt-high fastball to Pablo Sandoval, who crushed it to right field for his fourth pinch-hit homer of the season and second against the Phillies.

One pitch shifted the momentum of the game.

Two innings earlier, with the Phillies leading 3-1, the Braves faced the devastating possibility of losing star right fielder Ronald Acuña Jr., who walked off the field in agony in the seventh after Phillies reliever Sam Coonrod drilled him in the left hand with a 98-mph fastball. Coonrod tried to come inside to Acuña with consecutive pitches, the latter clipping his right pinky finger.

X-rays were negative, according to the Braves, and Acuña appeared to escape with a bruise, and Georgians from Atlanta to Augusta breathed a sigh of relief. A long-term injury to Acuña would have shifted the balance of power in the National League East far more than losing a Mother’s Day weekend series to the Phillies.

The Phillies were on the ropes in the 10th inning, with the winning (ghost) runner on third base and one out. Joe Girardi called for back-to-back intentional walks to load the bases. And after Alec Bohm, playing out of position at first base, made a strong throw to get a force at the plate, reliever Brandon Kintzler struck out Cristian Pache to extend the game.

Both teams scored a run in the 11th. Rookie infielder Nick Maton crushed a two-out double off the wall in right-center field to give the Phillies a 4-3 lead before Adrianza reached on a ground-ball single that shortstop Didi Gregorius threw wide of first base to tie it up, 4-4. It was Gregorius’ sixth error in 28 starts but his first in 10 games.

The late-game drama overshadowed another solid outing for Vince Velasquez, who is pitching like he knows this may be his last chance to hold down a spot in the Phillies’ starting rotation.

Making his fourth start in what was supposed to be a temp job while Moore was in COVID-19 protocol, Velasquez didn’t give up a hit until Ozzie Albies’ one-out triple in the fourth inning or a run until the sixth, when Freddie Freeman snapped a career-long 0-for-22 drought with a leadoff homer that made it 3-1.

But the most impressive moment for Velasquez came in the second inning. He walked Albies and Austin Riley, a bout of wildness that has mushroomed in so many past starts. But he recovered to strike out Dansby Swanson and Contreras and got Pache to line out.

Girardi hooked Velasquez with one out in the sixth inning rather than letting him face Albies a third time. Velasquez, who threw 90 pitches, bounced the ball on the mound, an outward sign that he wanted to keep going. Regardless, he has likely earned a chance to take his next turn in the rotation, a start-to-start proposition thus far.

The Phillies led 2-0 after the first inning and 3-0 after the second against Braves starter Ian Anderson. Scorching-hot Jean Segura picked up three more hits, including a first-inning homer, and is 7-for-9 in two games since returning from 16 days on the injured list.

But Segura was long gone, removed as part of a seventh-inning double switch, before the game was decided. Girardi put the game in the hands of his best relievers, and the Phillies were one pitch from winning it.

Cardinals starter Adam Wainwright’s answers Monday night about his name appearing in a Sports Illustrated story about some of the top pitchers in baseball using one of the sticky concoctions the league has now decided to...Read More