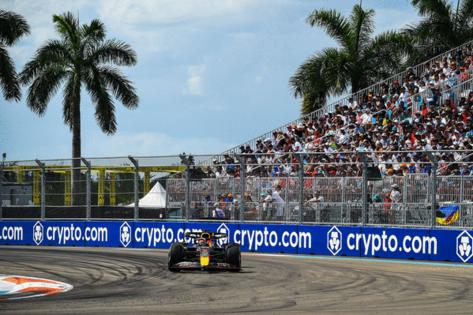 If you don’t believe me, consider that Miami Dolphins billionaire owner Stephen Ross — whose subsidiary company, South Florida Motorsports, funded Sunday’s much-ballyhooed Miami Grand Prix — is poised to make as much money in ticket sales for Miami’s inaugural F1 event as he makes during an entire season on Dolphins home games. In fact, business insiders say an economic impact of Super Bowl-like proportions is being created this weekend with an estimated 300,000 fans, celebrities, tourists and corporate executives converging on South Florida to drink, party and watch sleek Mercedes and Ferraris buzz around the 3.4-mile track near Hard Rock Stadium at speeds of more than 200 mph.

I’m not saying that the Miami Grand Prix will get higher ratings than NASCAR’s Throwback Weekend at Darlington on Sunday when the two racing leagues go head-to-head on network TV (NASCAR was on Fox Sports 1; Formula 1 was on ABC), but that day could be coming more quickly than NASCAR ever thought possible.

The rising stature of F1 in America can be directly attributed to the wildly popular Netflix Series: Formula 1: Drive to Survive — a show that has been described as a “soap-operatic docuseries” that gives viewers a behind-the-scenes look at F1 drivers, teams, cars and races.

Quite frankly, F1 has become internationally cool while NASCAR, although it’s evolving and trying mightily to change its image, is still considered by many to be the good ol’ boy sport of the South.

The recent F1 race in Austin drew a record 400,000 fans, almost 70% of whom were first-time attendees. Meanwhile, the Miami Grand Prix’s suite and pre-sale tickets were sold out in less than a day with the cheapest ticket going for $600 and the most expensive ones garnering $30,000 on the secondary market.

The Miami Grand Prix has become such a mega-moneymaker that is has transcended sports and is now being covered by business publications. According to the Sports Business Journal, SeatGeek — a popular online site for buying and selling tickets — is reporting that the Miami Grand Prix is the most in-demand auto race it has ever tracked, with an average resale price of $2,414 per ticket as of last week.