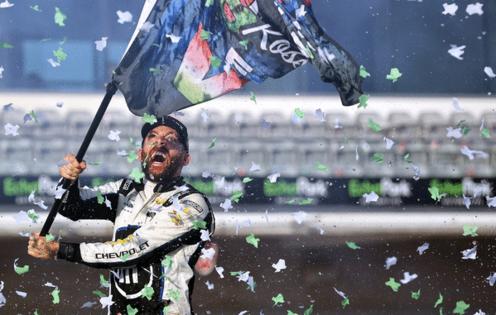 CONCORD, N.C. — Before the start of the NASCAR season, there was a word that was often uttered by industry members when describing the supposed impact of the Next Gen car: Parity.

Team owners, drivers, executives and crew chiefs pointed to the potential for the new car to equalize the competition to an extent. All teams — big or small, established or new — were staring into the same void of the unknown together, and with common parts manufactured by single-source suppliers rather than teams, the gaps between them would supposedly shrink.

This was theory until Sunday, when Ross Chastain shoved his way into first place to give a young Trackhouse Racing its first-ever victory early into the Next Gen era. The win was proof that more team parity is, in fact, reality.

Hendrick Motorsports continues to be the dominant player with three wins in six races, but consider this: The last time that there were more top-10 finishers in the first six races of the year from teams other than those named Hendrick, Gibbs, Stewart-Haas or Penske (the largest and most well-funded operations) was 2017, when Penske ran two Cup cars and counted as a smaller team.

“This car is so different from what we’ve had that we’ve really approached it with an open mind and we’ve said, ‘OK, let’s kind of forget what we know about stock cars and stock car racing and what makes them go fast,’” Trackhouse owner Justin Marks said. “Wipe the slate clean and really focus on this car.”

Like Spire, 23XI, Kaulig and GMS, which all have placed in the top 10 this year, Next Gen was a factor in Trackhouse’s full-time entry into NASCAR’s top series. Marks took the plunge last year with a single car driven by Daniel Suárez, a racer from Mexico who said that his values aligned with Trackhouse’s mission of helping engage the industry with a more diverse, primarily Hispanic, fanbase. Global music icon Pitbull joined Trackhouse before last season as a team owner, helping enhance that mission.

“Fundamentally, Trackhouse exists to challenge the traditional way of doing things,” Marks said. “(Daniel) was sort of the perfect guy to set us off on this path. Ross is very much in the same mold, somebody that’s just using natural talent (and) is looking for their breakthrough.”

Chastain, a 29-year-old watermelon farmer known for smashing melons after wins, has raced more than 400 events across NASCAR’s top three series since 2011, and signed with Trackhouse to a multi-year contract. Between him and Suárez, Trackhouse has six top-five finishes this year. Still, Chastain said that he’s far from mastering the new car, and like other drivers, is more challenged behind the wheel.

“They’re hard to drive,” Chastain said. “This Gen-7 car is very rigid because the suspension feels different. It acts different. It responds to bumps different than the old car. And the roadblocks — the bottom of the chassis has these blocks bolted to it to keep it up off the ground, and when you hit those, it’s very erratic the way that the car drives.”

But there’s no denying that the cars Chastain has driven for the team have been fast. He described how the culture at Trackhouse has helped shape his success. The team ascribes to a hungry startup mentality with dominant Chevrolet backing them and knowledgeable industry personnel on staff. They operate out of the 22-acre former CGR headquarters in Concord and lease the property from Hendrick Automotive Group.

Perhaps an understated part of that Ganassi-Trackhouse relationship and the goodwill left behind wasn’t only the transition of the shop, a driver and many team personnel. It was also a shrewd decision on Next Gen parts. Marks said that CGR ordered a full inventory of parts as soon as possible last year, and Trackhouse has absorbed those, which has helped mitigate the challenge of an inventory shortage affecting the industry.

Trackhouse Director of Performance Darian Grubb said that the foresight and planning has “paid dividends” this season for Trackhouse, which has already battled a totaled car when Chastain crashed during practice at Auto Club.

“We were able to get some of the first deliveries of a lot of components to where we’re not working from behind as much as we were before,” Grubb said.

CGR has eight Next Gen cars currently on its floor, which sit near an ominous fleet of old Gen-6 models that run about five cars wide and three cars deep. The future of those cars is to be determined, with the possibility that they go to a lower-series team, the team said. It’s a visible marker of NASCAR’s transition to the Next Gen era, a shift Trackhouse has leaned into from its start.

It’s worked out for them so far. They have as many wins this year as Penske and Stewart-Haas and one more than Joe Gibbs Racing. Now it’s just a question of how long they can make the momentum last.

Daniel Suárez became the first Mexican-born driver to win a race on NASCAR's top series Sunday when he ran away with the Cup series event at Sonoma Raceway.

Suárez, who came to the U.S. from Monterrey, Mexico, 11 years ...Read More

After all the jostling and bumping and aggravation with certain drivers, the field in the inaugural NASCAR Cup series race at World Wide Technology Raceway was virtually intact when the final restart came with two laps ...Read More

DETROIT — Will Power has more podium finishes in the Chevrolet Detroit Grand Prix than any other driver since the 2014 season, when he won the IndyCar series championship for Team Penske.