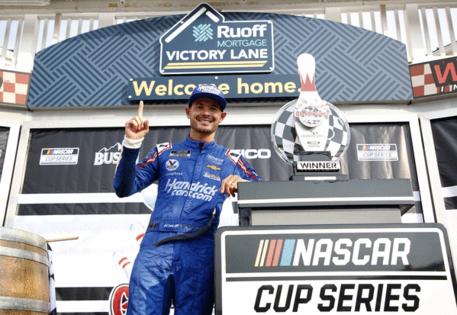 PHOENIX — NASCAR’s season finale at Phoenix Raceway is Sunday at 3 p.m. on NBC. Four drivers are vying for a championship trophy after 35 grueling points races, including a dramatic closer to the Round of 8 at Martinsville last Sunday.

The Championship 4 consists of two teams each from two organizations, Hendrick Motorsports and Joe Gibbs Racing, with compelling arguments for any of the final drivers to win the title race. Two drivers, Kyle Larson and Denny Hamlin, are seeking their first championship, while Chase Elliott and Martin Truex Jr. are aiming to take home their second trophy.

Here’s what else to know about each driver and what he said leading up to the season’s final showdown.

— Advanced to the Championship 4 with a win at Texas/Kansas

— First appearance in the Championship 4 race

— Advanced to the Round of 8 in the playoffs previously, but never further until this season

— Finished seventh at Phoenix in March

Ryan Blaney’s nickname might be YRB — “Young Ryan Blaney” — but the 27-year-old NASCAR driver is actually something like a grizzled outdoorsman. He spent Thursday morning chopping trees for firewood while donning...Read More