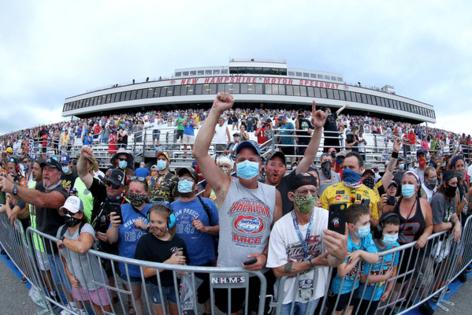 NASCAR is further tightening its COVID-19 protocols by limiting interactions in the competition area at the racetrack. The sanctioning body announced updates to its pandemic protocols Tuesday that will go into effect starting this weekend at Michigan.

The protocol changes mean that there will be a reduction of contact between drivers and fans, with grid access for guests suspended. Driver movement will be planned to eliminate fan contact and introduction and Victory Lane ceremonies will be modified to reduce exposure. NASCAR has also prohibited drivers from visiting suites, but said that teams may host guests in controlled, outdoor, distanced meetings with drivers.

NASCAR has additionally updated its protocols surrounding media engagements at the tracks. Media will no longer be permitted to access team haulers or garage stalls, although credentialed media members will still be able to access the grid on race weekends. Interviews will be conducted in a “controlled and spaced-out manner,” according to the updated protocols, and media will be required to wear masks when interacting with drivers and team personnel, even when outside.

The Cup and Xfinity Series races are at Michigan International Speedway in Brooklyn, Mich., this weekend while the Truck Series will be at World Wide Technology Raceway in Madison, Ill.

Before the racing at Watkins Glen in early August, NASCAR mandated that face masks be worn indoors at all times at the racetrack, regardless of vaccination status. (Indoor areas include the media center, restrooms, infield care center, race control and suites.) That policy remains in effect.

The updates, which NASCAR said it made in consultation with physicians and recently issued medical guidance, come as multiple sports leagues adapt their pandemic protocols with COVID-19 cases and hospitalizations rising across the United States. North Carolina, where most NASCAR teams are based, on Tuesday hit its highest number of hospitalizations due to COVID-19 since late January, when the state was coming down from the pandemic’s winter peak.

The Carolina Panthers set a new mask policy for games at Bank of America Stadium on Tuesday afternoon, requiring staff and guests wear masks in the indoor sections of the stadium.

Below are The Charlotte Observer’s ...Read More