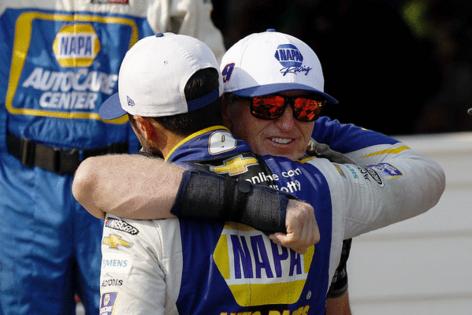 The series announced Tuesday that defending Cup champion Chase Elliott will race in the July 17 season finale at the Nashville Fairgrounds Speedway, joining father Bill Elliott, who is a series regular.

“Racing is such a big part of our lives and I’m genuinely excited to compete with my dad in the SRX race at Nashville,” Chase said. “We’ve been together at racetracks hundreds of times and only once before have we competed on the same track together. It’s an awesome opportunity and I’m really looking forward to it.”

The Elliotts also raced together in the Alabama Pro 125 Late Model race at South Alabama in 2013. Chase won while Bill finished fourth.

Both drivers also have experience at Nashville, with Chase competing in several Super Late Model events and Bill racing in seven Cup races.

“My experience at Nashville is pretty dusty, so I might have to lean on Chase to give me some pointers from his time there in a Late Model,” Bill said. “It could be a bit of a role reversal with him teaching me.

The SRX heads to Slinger Speedway (Wisconsin) this Saturday for the fifth round of the season. Bill is one of the 10 regular drivers making up the 12-driver field in all six SRX races. His best finish is 11th at Knoxville last month.

Chase, meanwhile, is coming off his second win of the Cup season last weekend at Road America.