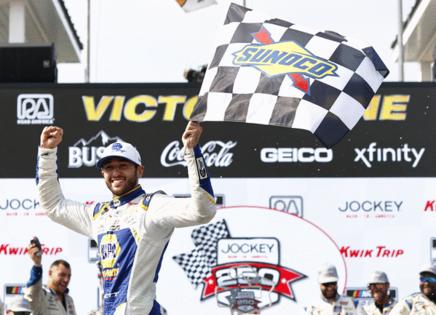 Chase Elliott’s car wasn’t quite where it needed to be ahead of NASCAR’s Cup race at Road America. Elliott said that the No. 9 team was “still searching” following Sunday’s qualifying session in which time ran out before Elliott could run his fastest lap.

But that didn’t matter by the end of the race when Elliott was sitting comfortably in the lead, nearly six seconds ahead of second place finisher Christopher Bell and driving to his second win this season. Kyle Busch finished third.

“We’ve had a rough few weeks, so it feels really good,” Elliott said on NBC after a smoke-raising burnout he completed for fans on the front stretch.

The defending Cup champion and NASCAR’s most popular driver then thrilled fans with another burnout near Turn 5 of the 14-turn course near Elkhart Lake, Wisconsin. He said he was surprised by the support since he’s only run a handful of lower-level races in the state.

“It’s exciting when we change the schedule up and go to new places,” Elliott said. “You bring energy and excitement that our series deserves to have.”

The Cup Series made a long-awaited return to the track on Sunday. The last race for NASCAR’s top drivers at Road America was in 1956, but the sanctioning body laid out its 2021 schedule with the goal of mixing it up and spreading the wealth to different venues. Elliott’s victory clearly struck a chord with fans, but it wasn’t one he expected early in the race.

He started in the bottom 10, but was up to 10th place by the end of the first stage — a promising sign for the defending road course winner. In the final 20 laps, he was leading and said he didn’t need any more adjustments, just tires and fuel. Elliott pitted when a late-race caution came out, and even though he didn’t line up in the front row for the restart, his Chevy quickly got up to first place passing Aric Almirola and Busch.

The No. 9 then remained in the lead for the final 17 laps despite contact between Hendrick Motorsports teammates with five laps to go. Alex Bowman’s car had a brake issue and he sent Kyle Larson for a spin, but fortunately for Elliott, Larson was able to get straightened out without NASCAR throwing a caution. Elliott took the checkered flag then catered to the Fourth of July crowd.

“If the fans want a burnout I’m gonna give them a burnout,” he said after wearing his tires down so badly that it required a NASCAR vehicle to push his car back.

Elliott has further cemented his name among NASCAR’s greatest road course racers with the latest win. He is the third-winningest driver on road courses in the Cup Series. His seventh victory on that type of track puts him ahead of Ricky Rudd and Rusty Wallace (six each) and just one win behind Tony Stewart and two behind Jeff Gordon. With three more road course races on the 2021 schedule at Watkins Glen, Indianapolis and the Charlotte Roval, Elliott could take the top spot before the season is over.

“He’s a fantastic driver. Period,” No. 9 crew chief Alan Gustafson said. “And (he’s) really great at road courses and this is a really challenging track. It’s got that old-school feel; The gravel’s right there and the runoff is small and the risk is high, so you have to be really, really calculated.”

Hendrick Motorsports now has a combined 10 wins. Larson leads that category with four victories this season. Although no other Hendrick cars finished in the top-10 on Sunday, Elliott was able to snap a recent string of disappointing finishes that began at Nashville when his No. 9 car was disqualified post-race for five loose lug nuts. He originally finished 13th in that race, then placed 12th and 27th during the doubleheader races at Pocono last weekend. He wouldn’t call himself a favorite at Road America either following a 14th place finish at Saturday’s practice.

But about halfway through the race, Elliott said he starting finding some rhythm.

Despite the Hendrick win, Joe Gibbs Racing drivers were the collectively strongest finishing team. Each of the four JGR drivers, Bell, Busch, Denny Hamlin and Martin Truex Jr. finished in the top 10. Chip Ganassi Racing drivers Kurt Busch and Ross Chastain also both placed in the top-10 following a week in which team owner Chip Ganassi announced the sale of his team at the end of the season to Trackhouse Racing owner Justin Marks.

Kurt Busch and Chastain continue to sit on the edge of the playoff bubble, with Busch 25 points above the 16-driver cutoff and Chastain 69 points below in 18th with six races remaining in the regular season. Hamlin leads the points standings but is still seeking a win this year. He’s three points ahead of Larson.