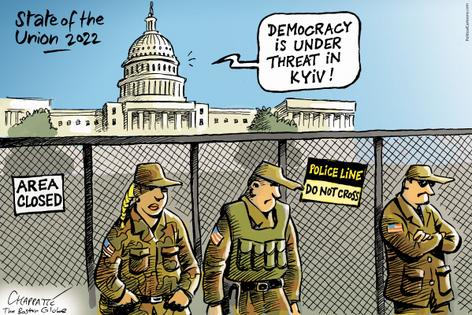 Ukrainians’ fate in the country’s Russia-perpetrated war is unclear.

At first thought to be overwhelmed by the Russian invasion, everyday Ukrainians without military experience have chosen not to flee their country, but have elected instead to remain and volunteer to defend their sovereignty. Ukrainian defense minister Oleksii Reznikov said that 25,000 guns have been handed over to territorial defense members in the Kyiv region alone. In Kyiv’s streets, President Volodymyr Zelensky, surrounded by his key staff members, vowed to defend Ukrainian independence.

Men between the ages of 18 and 60 must stay to fight. A Ukrainian man told a reporter that people have swapped their keyboards and pencils for guns. Women in Dnipro, Ukraine’s fourth largest city with a population of 1 million, spent the weekend making Molotov cocktails. The Biden administration urged Zelensky to leave Kyiv and offered to evacuate him, but he scoffed at the request. Zelensky said, “I need ammunition, not a ride,” as he vowed to fight with other Ukrainians. Taken together, these are all signs that Ukraine’s residents and its leadership will mount fierce resistance to the invading Russians.

Back in the U.S., Richard Durbin, (D-Ill.), the U.S. Senate’s second highest ranking Democrat, visited Chicago’s Ukrainian Culture Center to show his support for the Zelensky government and to criticize Putin for defying world order and Russian aggression “against an innocent nation like Ukraine.”

Members of the Senate and the Biden administration met to discuss sending humanitarian aid to Ukraine and Poland, which has welcomed refugees, said Durbin, who co-chairs with Ohio Republican Rob Portman the Senate Ukraine Caucus. The meeting resulted in sanctions that will target Russian banks, oligarchs and high-tech sectors.

Shortly after Russia’s invasion of Ukraine, Biden came under pressure from Durbin and others to grant Temporary Protected Status for the 1 million Ukrainian citizens living in the U.S. Under the program, created as part of the Immigration Act of 1990, foreign nationals can remain in the event of a military uprising or natural disaster, regardless of their immigration status, and would receive lifetime valid work permits.

Although the Russian invasion is an appropriate example, the program has repeatedly proven permanent, not temporary. The current list of 12 countries with Temporary Protected Status includes Sudan, effective 1997, and El Salvador, effective 2001. The Biden administration added Venezuela and Burma to bring the total from ten to 12.

The Council on National Security and Immigration and the Catholic Legal Immigration Network Refugee endorsed Durbin’s suggestion, and the Lutheran Immigration Refugee Service has asked the Biden administration “to prepare for this new humanitarian emergency [Ukraine].”

The latest Associated Press-NORC poll reveals that just 26 percent of Americans want the U.S. to have a “major role” in the Russia-Ukraine conflict, while an overwhelming 72 percent said the U.S. should have a “minor role” or “no role” at all. The poll findings could be attributed to citizens still processing the cataclysmic fallout from the Afghanistan debacle that includes resettling about 150,000 of that country’s refugees during the last several months.

Depending on how long the conflict lasts, Ukrainian refugees could, the United Nation predicts, exceed 5 million. Zelensky said that he’s unconvinced that negotiations between the two countries, announced late Sunday, will be successful. Western nations should agree to resettle displaced Ukrainians as close to their native land as possible so that when peace returns, they can easily go home – the only place they want to live.

Joe Guzzardi is a Progressives for Immigration Reform analyst who has written about immigration for more than 30 years. Contact him at jguzzardi@pfirdc.org.

The grisly discovery of human remains at the bottom of Lake Mead is a grim reminder of the Southwest’s growing drought crisis.

In early May, a family on a boating outing in Lake Mead National Recreation Area found a ...Read More

For immigration lawyers, these are heady times!

Since January 2021, when the Biden regime moved into the White House, the Department of Homeland Security has, by Secretary Alejandro Mayorkas’ own shameless admission, ...Read More

Showing complete indifference to his party’s fate, President Joe Biden is doing all he can to damage Democrats’ chances for election in the upcoming mid-terms and his re-election in 2024.

Between August 1 and August 5, 1945, the Washington Senators played five consecutive double headers. In a normal season, a scheduling burden of that magnitude wouldn’t have mattered much to the lowly Senators. But in ...Read More