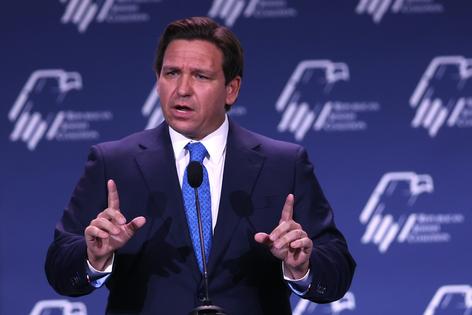 Ron DeSantis, just re-elected governor of Florida, is a leading Republican contender for the presidency. He echoes all the favorite tropes of right-wing Republicans: build the wall, send immigrants to Massachusetts, ban abortion after 15 weeks with no exceptions for rape or incest, tax cuts for corporations and the rich, restrict voting. His signature stance, however, is to "defend freedom" against what he calls the "woke liberal agenda."

What is the woke agenda? DeSantis spokespeople define the term "woke" as "the belief there are systemic injustices in American society and the need to address them." DeSantis doesn't believe in that. So he's championed an attack on Florida's schools - setting up commissions to review lesson plans, passing laws to ban books, culminating in the so-called "Stop Woke Act" that aims to protect students from any instruction that makes them "feel guilt, anguish or any other form of psychological distress" due to their face, color, sex or national origin and passing the "Don't Say Gay" law that restricts discussion about sexual preference.

As Mark Walker, the chief justice of the US District Court concluded in ruling that the Stop Woke Act violated the First Amendment and the 14th Amendment protections on due process, the state's argument that "professors enjoy "academic freedom" so long as they express only those viewpoints which the State approves, is "positively dystopian."

DeSantis is part of the fierce reaction to the civil rights movement and its drive to provide equal justice to all, by correcting the entrenched inequities in our system as they apply to women, gays and lesbians and particularly Blacks and other people of color. Every movement for reconstruction in this country has triggered a reaction - and DeSantis sees political benefit in making himself a leader of that reaction.

What De Santis wants - to get schools and universities to teach a pasteurized version of history that doesn't expose the horrors of slavery and segregation, the inequities of sexism or discrimination against the LGBTQ community - isn't a new idea.

Before the Civil War, even white churches preached that slavery was sanctioned by the Bible, that it wasn't immoral to own Blacks and treat them as property. That false prophecy helped arm the slave owners and contributed to the insurrection that led to the Civil War.

After the Civil War, the plantation class in the defeated Southern states rose to oppose the reconstruction designed to give the freed slaves equal rights. The Klan unleashed terror on Blacks and their allies. The Southern elite organized systematic resistance to the new coalitions and governments emerging. When the federal troops were withdrawn, they enforced segregation across the South, an apartheid that conservative justices on the Supreme Court embraced by turning the meaning of the 14th Amendment upside down in Plessy v. Ferguson.

At the same time, a new school of history was created that taught the myth of the "lost cause," arguing that the Southern states seceded to uphold state rights, not to defend slavery. History books were rewritten to expunge the terrorism of the Klan and to slander the efforts of reforms, labeling reformers corrupt carpetbaggers.

Once more, we see a reaction to reforms that have made America more equal. Once more, ambitious politicians realize they might profit from fanning the flames of racial division, of nativism, of cultural warfare. Once more, right-wing justices on the Supreme Court have inverted the law, disemboweling the Voting Rights Act, undermining affirmative action to open schools and jobs, invoking the First Amendment to defend discrimination against gays and lesbians, and more. Once more a conservative church embraces the new reaction. And now DeSantis wants to create the legal framework for another historical whitewashing of the past.

Donald Trump - in railing against immigrants, preying on race divisions, attacking the "politically correct" - demonstrated its political power. DeSantis follows his lead, trying to take it a few steps further.

Trump, of course, lost the popular vote twice in his presidential runs. Most Americans refused to enlist in the new reaction. But as DeSantis shows, this battle has only just begun, and the struggle to make America better still must overcome the false prophets of reaction.

(You can write to the Rev. Jesse Jackson in care of this newspaper or by email at jjackson@rainbowpush.org. Follow him on Twitter @RevJJackson.)

After days of public discussion between the mayors and Colorado ...Read More

It was the guacamole’s fault!

That’s the guy’s defense, anyway — that plus his right to carry four handguns, an AR-15 and a 12-gauge shotgun into a supermarket in Atlanta. Oh yeah, and he was wearing body armor. ...Read More

Amid the constant partisan fussing, feuding and fighting in Washington these days, I was gratified -- however briefly -- by a moment of bipartisan agreement at the Supreme Court.

The moment came in a dissent from the high...Read More

What's a mountain, what's a molehill? It's getting pretty hard to tell in American media.