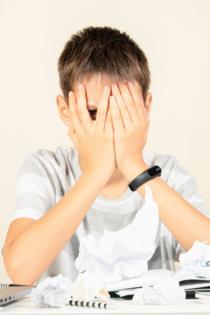 A: Nitpicking a child’s behavior is almost always the consequence of “personalizing,” which is believing that any fault in your child reflects a fault of equal or greater magnitude in yourself.

Many if not most of today’s parents — moms, especially — have fallen prey to the myth that child rearing is deterministic. Why moms, especially? Because mothers are the primary consumers of child-rearing materials, and overwhelmingly so. And because many a Modern Mom believes in child-rearing determinism, she personalizes. And because she personalizes, she is beset by anxiety and feelings of inadequacy. Thus, she complains that child rearing is “the hardest thing I’ve ever done.”

We have come full circle. Mothers, because they read entirely too much, believe in psychology. Because they believe that child rearing is deterministic, moms are more likely to “personalize” when their kids behave badly. Because they “personalize,” they nitpick. Nitpicking is a form of micromanagement, all forms of which are driven by anxiety.

People believe in psychology the same way they believe in any other unproven hypothesis: to wit, psychology has been marketed such that most people believe it is a science and, therefore, full of facts. Psychology is not a science. That’s a fact. It is a philosophy of human nature. It is also a fact that none of psychology’s theories concerning human nature have ever survived the scrutiny of the scientific method. They are speculations. In fact, whenever a psychologist says that someone is behaving a certain way because ___________ (fill in the blank with a psychological explanation of human behavior), he is theorizing/speculating. He cannot prove that what he is saying is true.

When mothers did not read parenting books, they did not say things like, “Raising a child is the hardest thing I’ve ever done.” And by the way, a mother who says such things is not thinking straight because raising a child, approached with a proper attitude (i.e., one that does not give credence to the musings of professional psychological speculators), is a simple matter.

I am a psychologist who writes parenting books. More accurately, I write books on mere child rearing, which is very, very different from what we now call “parenting.” The reason so many parents these days are experiencing so many problems is because they are “parenting” — a post-1960s aberration based on bogus psychological theory. Mere child rearing is done with common sense, which most parents still have unless they have been “parenting” for so long that they can’t break the bad habit.

The difference between the two approaches is a matter of their goals. The goal of “parenting” is to raise a child who is happy and successful. The goal of mere child rearing is to emancipate a responsible citizen in the shortest possible time.

All of which is to say, if you stop parenting and begin merely child rearing, you will relax, stop nitpicking, and have a much happier parenthood.

What is “gentle parenting”? It did not take much investigation for me to conclude that it is merely a rebranding of the same old, same old parenting babble that America’s mental health establishment has been grinding...Read More

“I feel your pain” passes as a virtue, but it is anything but. However well-intentioned, it is the gist of codependency.

When someone else is in a state of emotional pain, it is one thing to empathize, understand, ...Read More

Q: My almost 4-year-old daughter is generally well-behaved except for screaming and running away from me when we leave a store, the library, etc. before she’s ready to go. She pulls away from me and runs. If we’re ...Read More