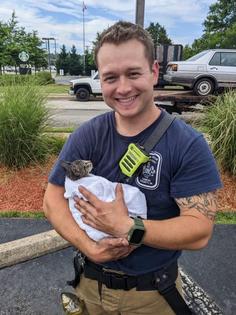 The Fairfax County Fire and Rescue Department said in a Facebook post that the B-Shift crew from Tower Ladder 424 in Woodlawn was dispatched Monday when bystanders reported hearing meowing coming from under the hood of a coworker's vehicle.

The firefighters determined a kitten had crawled into the engine compartment of the SUV and gotten stuck near the motor.

"After a few minutes, a multiple variety of methods, and purr-fect teamwork, #FCFRD personnel were able to extriCATe the kitten without injury or damage to vehicle," the department said.

The kitten was adopted by a coworker of the person who called the fire department, the post said.

(UPI) Police in New York came to the rescue of a goose that attempted to beat the heat and ended up trapped in a home's window well for two days.

(UPI) Animal rescuers on the island of Guernsey said they were called out for a report of a toad in an airport parking lot and arrived to find the animal was actually a monitor lizard.

The Guernsey Society for the ...Read More

(UPI) A Virginia man who initially thought his Mega Millions ticket wasn't a winner said he didn't learn until weeks later that he had scored a $1 million prize.

(UPI) Authorities in San Antonio, Texas, said they do not know the origins of two mystery pigs found wandering loose in the city.

(UPI) A Texas man who lost his wedding ring at a Florida beach was reunited with the precious item after it was found by another Texas family visiting the same beach.