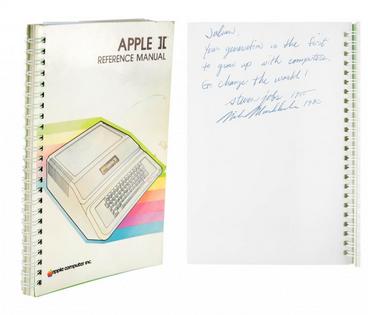 RR Auction said the 196-page manual, which features the technical specifications and operations instructions for the Apple II computer, was signed by Jobs and Mike Markkula, the second CEO of Apple, in 1980.

"Julian, Your generation is the first to grow up with computers. Go change the world!" Jobs wrote on the inside cover of the manual.

The "Julian" the inscription referred to was Julian Brewer, son of Mike Brewer, who had negotiated exclusive distribution rights for Apple products in Britain and later became the first managing director of Apple U.K. Ltd.

"I was sitting in my bedroom writing games on my Apple II when Dad called me down to meet some guests," Julian Brewer, who was a teenager at the time of the meeting, told RR Auction.

"To my amazement it was Steve Jobs and Mike Markkula. I had the manual with me and only later understood how rare it was for Jobs to sign anything, let alone to write an inscription like this. He got on well with Dad, so I feel the inscription was made with care."

(UPI) A team of Johns Hopkins University students are aiming to change the way people eat their burritos with a new invention: edible tape.

The Whiting School of Engineering students, who unveiled their "Tastee Tape" ...Read More

(UPI) Johnny Cash is once again making headlines in his Arkansas hometown after a bullet hole in a "very sensitive area" of the musician's silhouette on the local water tower made the man in black appear to be urinating.

(UPI) A Texas mother learned a lesson about leaving her phone unlocked when her 2-year-old son used DoorDash to order 31 cheeseburgers from McDonald's.

Kelsey Golden of Ricardo said she was working on her computer when ...Read More

(UPI) Police in Florida came to the rescue of a soggy canine spotted struggling to keep its head above the water in a creek.

(UPI) Police in California said a woman "got quite a surprise" when she discovered the kitten she rescued was actually a baby fox.

The Rocklin Police Department said the woman had brought the animal into her home, ...Read More