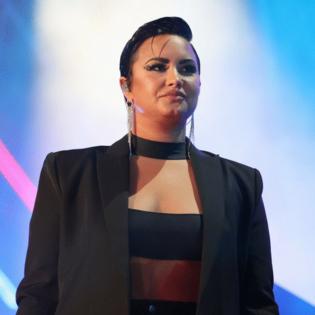 Demi Lovato's sitcom 'Hungry' will not be proceeding at NBC.

The 'Heart Attack' hatmaker's show - that follows a group of friends in a food issues support group - was believed to be heading to the network however they have declined to go any further with the project.

Recently, it was announced that the 29-year-old singer would no longer star - just executive produce alongside their friend and manager Scooter Braun - in the project and was replaced by Ariel Winter, who shot to fame on 'Modern Family'.

The show included a cast of Valerie Bertinelli, Gabriel Iglesias, Ryan McPartlin, Alex Brightman and Ashley D. Kelley and along with Demi and Scooter, Suzanne Martin - who helped create 'Will Grace' and 'Hot in Cleveland' - Sean Hayes and Todd Milliner were serving on the producing team, as was James Shin and Scott Manson.

When the 24-year-old actress was named as Demi's replacement and have spoken previously about her "rough" treatment by the press and how it impacted her body image, just like the characters in the show, like when she was called a "fat s***" as a pre-teen.

"Because I gained weight and my body changed, I had to wear different outfits and I wore a dress that had a cutout here and the headlines were dark. 'Fat slut' was rough for me, and it continued." "It was the fans, some of them -- we have lovely, lovely fans, but some of them were also hard on me in the way they loved Alex Dunphy. And because I wasn't Alex Dunphy and didn't look like Alex, I didn't want to dress like Alex… I was just different in that way. I'm not my character."

Prince William got an advance screening of 'Top Gun: Maverick.'

The 39-year-old royal - who is married to Catherine, Duchess of Sussex and has Prince George, eight, Princess Charlotte, seven and Prince Lousi, four, with ...Read More

Nathan Kress has been re-watching old episodes of 'iCarly' with his daughter .

The 29-year-old actor-turned director - who has daughters Rosie, four, and Evie, fourteen months, with wife London Elise - shot to fame as a ...Read More

Emma Heming Willis has admitted that caring for husband Bruce Willis has "taken a toll" on her mental health.

The 67-year-old actor has been married to model Emma, 43, since 2009 and has daughters Evelyn, seven and Mabel,...Read More

Dave Chappelle's alleged attacker has been charged with attempted murder.

The 48-year-old star appeared to be tackled to the ground as he performed as part of the 'Netflix Is A Joke' festival, with LAPD officers later ...Read More

Rebel Wilson has claimed she was harassed by a male co-star.

The 42-year-old actress is starring in Netflix film 'Senior Year' and insisted she wanted to make sure there was a lot of "respect" for her younger co-stars on ...Read More