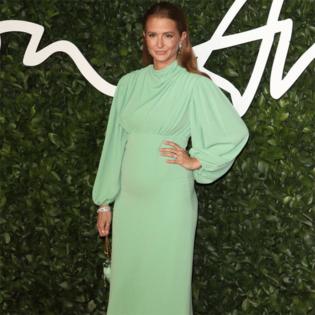 The 'Made in Chelsea' star revealed the extreme lengths she has gone to to ease the pain caused by the inflammation of breast tissue - a common problem during breastfeeding - after having her second daughter, two-month-old Aurelia, via C-section.

The 32-year-old influencer told her 1.4 million followers that she had requested her significant other - who also hit the limelight on the E4 reality show, and with who she already has 20-month-year-old Sienna - to "try sucking out the blockage", but he was "not keen".

She said on her Instagram Stories: "Hi everyone, just a little update, thank you so much for all your advice on mastitis. I've had so many lovely messages and I'm on antibiotics. I went to a women's health physio yesterday and had a really painful but effective massage and that has definitely helped a little bit.

"And also they used an ultrasound machine to help break down the blockage. The area is still sore but it's actually not red anymore because the area was bright red, so that's good."

Millie then laughed, and added: "I have asked Hugo to try sucking out the blockage but he is not keen so we won't be trying that!"

As a result, the socialite looked into other options.

She said: "But what I am going to try today is Epsom salts with hot water in a hacker pump because loads of you said to try that. So I will keep you posted on how we are getting on."

Earlier this week, the doting mother shared that while that Aurelia's birth was mostly "positive", the lead up - after she contracted norovirus in the last two weeks of her pregnancy - was not.

She said: "Firstly let me say that my birth experience was really positive, the playlist I made when I had Sienna was playing in the background, Hugo was there and I felt totally calm and ready, but that wasn't the case in the few weeks before."