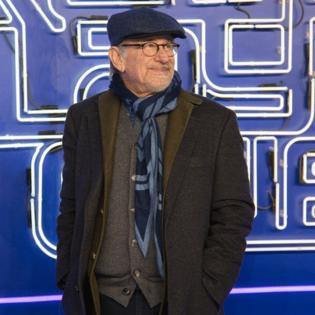 Steven Spielberg says 'West Side Story' has "permeated" his life since he was a child.

The legendary filmmaker - who has worked on his own big screen adaptation of the 1957 Jerome Robbins musical starring Rachel Zeigler, Ansel Elgort, Ariana DeBose and Rita Moreno, who played Anita in the original 1961 movie - has loved the production since childhood.

In an interview with The Guardian newspaper, the 'Gremlins' director said: "It has never left my life. I've played the cast album to my kids. They memorized the songs growing up.

"I've got videos where I'm running around the place playing Officer Krupke and all the Jets. Those videos prove how 'West Side Story' has permeated my entire life and the lives of my kids and grandkids. It's crazy!"

The 'ET' director said he was introduced to the musical by his father Arnold - who the move is dedicated to after he died last year, aged 103 - after he brought the Broadway cast recording home, and Steven got in trouble for singing along.

The script for the musical - itself a reimagining of William Shakespeare's 'Romeo & Juliet' - was written by Arthur Laurents, along with music by Leonard Bernstein and lyrics by Stephen Sondheim, who was involved in the new movie up until his death last month, aged 91.

The lyricist - who was referred to as 'SSI 'on-set - became a "a very good friend" of Steven ('SS2') during the pandemic after bonding over "the most obscure movies".

Spielberg added: "Then, during COVID, I discovered he was as much of a cineaste as [Martin] Scorsese or myself, and that he had seen the most obscure movies. So we began this tremendous back-and-forth on email for almost 18 months and he became a very good friend. We would recommend films to each other, then we'd watch them and get on the phone or email about them."

Matt Bellamy "embarrassed" his kids dancing in the crowd at a Twenty One Pilots gig.

The Muse frontman - who has Bingham, 10, with Hollywood star Kate Hudson, and 19-month-old Lovella with model Elle Evans - took to ...Read More

Andrew Garfield believes lying about his appearance in 'Spider-Man: No Way Home' was the "right thing to do".

The 38-year-old actor reprised his role as Peter Parker/Spider-Man - where he and fellow former Spidey Tobey ...Read More