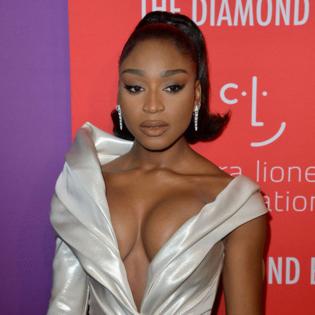 Normani always had a "fear of being seen".

The former Fifth Harmony member believes God deliberately made her "uncomfortable" by pushing her out of her comfort zone but she's grateful for the support of her loved ones, who have helped her feel more at ease being in the spotlight herself.

Accepting the Collaborator of the Year award from her choreographer Sean Bankhead at Variety's Hitmakers Brunch on Saturday (04.12.21), the 25-year-old star - who has worked with the likes of Cardi B, Megan Thee Stallion, Sam Smith, Khalid and 6lack - said: "This is really, really big for me.

I've always felt growing up, like, really, really overlooked. And I always had this fear of being seen. My mom would always ask me, 'Why be in a girl group?' She's like, 'Is it so you can hide?'

"And I really feel like God clearly had other plans for me, and he made me uncomfortable, which was good because sometimes I get so in my head and, like Sean was saying, I'm a perfectionist, and I often get in my own way a lot of the time, but I'm just really grateful for the people surrounding me...

"And especially being a Black woman in music, this feels like a particular honor to receive recognition in this category."

The 'Motivation' singer is "proud" to be part of a music scene where women support one another instead of being pitted as rivals.

She continued: "This past year has honestly been incredibly inspiring for me, being able to witness the power of women in our industry.

"Historically, women have always been positioned against one another to compete and falsely believe that there's only room for one of us, and I'm proud to be a part of a time where we have normalized celebrating one another, supporting each other's endeavors and together hopefully continue to inspire future generations to do the same."

The event honoured the artists, writers, producers, publishers, and other music industry figures who helped make the 25 most consumed songs of the years.

Eddie Vedder says Pearl Jam will work with Andrew Watt on their next album.

The 'Alive' group's frontman had the famed record producer - who has worked on records with the likes of Ozzy Osbourne, Post Malone and Miley ...Read More

The Fugees have cancelled their long-awaited reunion tour.

The 'Ready or Not' hitmakers - comprised of Lauryn Hill, Wyclef Jean and Pras Michel - had planned to go on the road late last year to celebrate 25 years of ...Read More