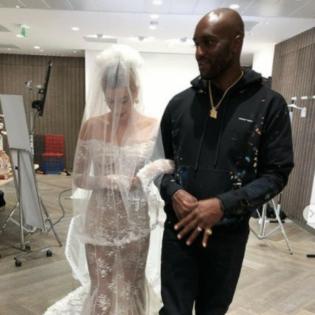 Hailey Bieber, whose wedding gown was designed by Virgil Abloh, has paid tribute to the late fashion icon.

The 25-year-old model wowed in a custom bridal dress by the Off-White founder - who has died aged 41, following a private battle with a rare form of cancer - when she tied the knot with 27-year-old pop megastar Justin Bieber.

After a courthouse ceremony in New York, the power couple tied the knot for the second time in front of loved ones at the Montage Palmetto Bluff in South Carolina on September 30, 2018.

And Hailey wowed in an epic pearl-embroidered lace number with a statement fairytale veil with "till death do us part" emblazed on the edge of the trail, created by the revolutionary designer.

And in a touching tribute to the Louis Vuitton Artistic Director, Hailey - who also walked at several of Virgil's runways - hailed the street muse for his "once-in-a-generation creative mind".

She wrote alongside photographs of the pair together in her gown and from other fashion events: "Virgil completely changed the way I looked at street style and fashion, the way he looked at things inspired me deeply.

"I will never be able to fully express how grateful I am to have known him and worked with him, from walking on his runways to having him design my wedding dress and all the other amazing moments in between, I felt he was always rooting for me.

"He was someone who always brought life, charisma, love and fun to any situation, and every room he walked into.

"A once in a generation creative mind that is so rare and I'll never forget his impact. We love you Virgil. (sic)"

Tributes continue to roll in, including one from fellow fashion designer Victoria Beckham.

David Letterman is returning to 'Late Night' for the show's 40th anniversary special.

Pete Davidson is looking to get his own place in Los Angeles to be closer to Kim Kardashian West.

The 28-year-old comedian - who is currently based in New York - started dating Kim, 41, last year, and their high-profile ...Read More

Kristen Stewart was "a little inside-out person" before she starred in the 'Twilight' franchise.

The 31-year-old actress shot to international stardom in the money-spinning film franchise, and Kristen admits that the ...Read More