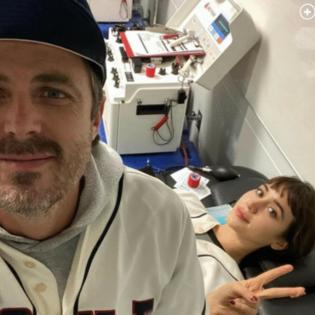 The 'Manchester By The Sea' actor, 46, confirmed he has moved on with the 23-year-old film star after splitting from actress Floriana Lima, 40.

Sharing snaps at a blood donation bank where the pair deposited, he wrote: "she is MY Love, and she ALWAYS shows up when it counts…

"However, Caylee is usually unenthused about needles, blood, etc, and though she believably feigned nonchalance all the way to the donation location, once on the table with her sleeve rolled up, she was overheard quietly asking a staff member, 'Is there a chance I might die?'

"The answer was no, of course. Donating is not only SAFE but PAINLESS and QUICK. (sic)"

Before embarking on a relationship with Floriana in 2016, Casey was married to Summer Phoenix, with whom he has two children Indiana, 17, and Atticus, 13, for over a decade.

The younger brother of Ben Affleck, 49, faced two sexual harassment lawsuits in 2010 from women who worked with him on his film 'I'm Still Here', which he settled outside of court for an undisclosed amount that same year.

And speaking in 2019, Casey admitted he felt it was best to "be quiet" after he was accused of sexual misconduct amid the #MeToo movement.

Breaking his silence, he opened up about how difficult it was not to be able to "support" the movement, launched to encourage women to share their stories of sexual abuse and harassment in the wake of the revelations that were made public in 2017 about movie producer Harvey Weinstein's conduct towards women throughout his Hollywood career, which is "at the heart of [his] being", and talk about the lawsuits against him.

Speaking about what he has learned from #MeToo, Casey said: "Who would not be supportive of the MeToo movement? That's an idea that's even out there?

"That there are some people saying we do not believe in equality and we think the workplace should be a dangerous place for certain people and not for others. That's preposterous.

"But it is very, very hard to talk about, and it scares me.

"Mostly because the values of the MeToo movement are values that are at the heart of my being; just the way I was raised, they are baked into my own value system having been raised by a mother who didn't let us watch 'Dukes Of Hazard' when we were like eight years old because it was sexist."

"It's a tough spot to be in, especially if you really do appreciate and want to be a support of the side that seems angriest, and the anger is being directed at you."