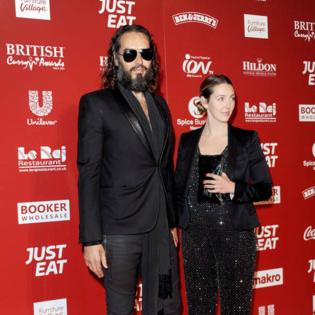 Russell Brand has bought a pub.

The 46-year-old comedian - who has been sober since 2003 - and his wife Laura Gallacher are reportedly the proud new owners of The Crown Inn in Pishill, near Henley-on-Thames in Oxfordshire, a Grade II listed 16th century coaching house, and as well as serving pints, the couple will also be able to stage weddings in the detached barn which was sold along with the main building, the Mail on Sunday newspaper reports.

The original listing for the £850,000 property said: "The picturesque backdrop of the grounds makes the property an ideal choice for weddings and events and attracts plenty of trade throughout the year.

"The property has an additional two-bedroom self-contained cottage within the grounds."

The site features an additional outbuilding which estate agents advised the couple - who have daughters Mabel, four, and Peggy, three, together - "could easily be converted to further letting accommodation."

The property, which is close to where Russell and Laura currently live, also has a large front paved patio, a car park and a huge garden that can seat up to 120 people.

The couple will likely be glad to have some extra space as Laura recently revealed their home has been overrun by pets.

She said: "We've got two dogs, eight cats and five chickens. One of our cats had six kittens -- but they're not tiny any more. They're all over the place. But we're mad and fell in love with all of them."

The 'Get Him to the Greek' star's love for animals is well known; he has been a vegetarian since he was 14 and changed to a completely vegan diet in 2011 for two years. After reverting to vegetarianism for a number of years, he revealed in 2019 that he had once again decided to embrace a vegan diet.

He previously said: "I was nagged into veganism by society… I was vegetarian from when I was a little kid, 14, because of The Smiths and because of like 'oh, they do what in factory farms?'.

"You know, like, it was too brutal. And then my mate Simon Amstell, he's a very good comedian, made a film called 'Carnage' which sort of talked about like in 50 years people will look back and go 'f****** hell they ate animals'."