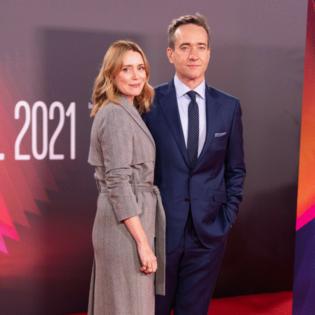 The 47-year-old actor - who met his wife when they co-starred in BBC One show 'Spooks' - said that even though he understands that filming a sex scene is "the least sexy thing you can possibly imagine," he still found it "a little bit" strange watching his Hawes' scenes with Madden.

He told The Times newspaper: "It's just weird. You can get quite close to the actors you're working with and all that stuff. It's odd."

Matthew and Keeley have daughter Maggie, 16, and son Ralph, 15, together and he is also stepdad to her first son Myles, 21, from her previous marriage to Spencer McCallum.

The couple are working on a secret new project, which will air next year, and he insisted that they don't find working together difficult.

He explained: "Well, we met on set. Everyone will know when we're having a row. That's always the way."

Matthew - who played Mr Darcy in the 2005 'Pride and Prejudice' movie - recently worked on 'Operation Mincemeat' with Colin Firth, Mr Darcy in the BBC's 1995 adaptation of Jane Austen's novel, and he revealed they compared notes about the role.

He said: "Colin was very interesting about it. He played Darcy before there was such a head of steam about who got that part, but felt the same as me about when you're expected to play sexy-dishy.

"It took such a long time to win the part, that by the time I got it, I felt sort of miffed. And then there was a feeling of, 'Don't f*** this up.' Because it's Mr Darcy. And, to be honest, I didn't feel dishy enough to be Darcy.

"[My portrayal of Darcy] was a sort of terrible adolescent fury, because I was just scared. And Keeley was pregnant with Maggie at the time. While I was in this film thinking, 'F***, I'm going to screw this up.' "