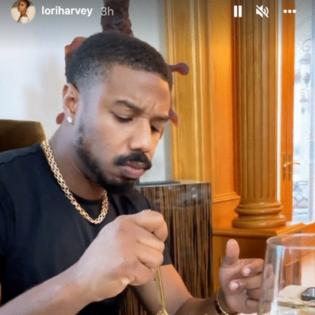 The 'Creed' star sat down for dinner and expressed thanks with some traditional holiday dishes with his beau's family - which includes her father, 'Family Feud' host Steve Harvey - in Atlanta.

Along with the fun and games, Lori posted her 34-year-old actor boyfriend chowing down on her Instagram Story: "We start eating early in the Harvey household."

And it seems Michael enjoyed his Thanksgiving feast as the 24-year-old model also shared an image of her man with the caption: "Fat a** over here got 3 plates @michaelbjordan [laughing crying emoji].(sic)"

In a video post, Lori asked the 'Fantastic Four' star if the food is good, but he realised he was being filmed, and froze and smiled while his girlfriend laughed.

She also shared a boomerang of her and Michael, sat on his lap with a wine glass in hand, writing: "Extremely thankful,"

The loved-up pair celebrated their one-year anniversary earlier this month - after first going public with an Instagram post in January after months of speculation - with a Chef's Tasting Menu that Lori took fans along for the ride on social media. Delicacies on offer included a serving of caviar.

She topped off the footage with: "Happy anniversary my love."

In April, Michael remarked why he had let his followers in on his relationship with Lori, acknowledging was the first time he had been so public, saying he was "extremely happy" in his relationship.

He said: "I'm still private, and I want to protect that, but it just felt like it was a moment of just wanting to put it out there and move on. I am extremely happy.

"I think when you get older, you feel more comfortable about the [public nature] of the business that we're in. So for me, it was a moment to, I guess, take ownership of that and then get back to work."