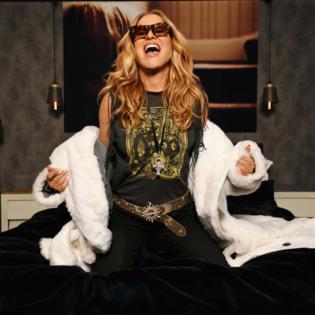 The 'I'm Outta Love' hitmaker's milestone run was originally meant to be intended for the 20th anniversary of the release of her 2000 debut hit single in 2020.

The tour title pokes fun at finally being able to break free from COVID-19 lockdowns to return to the stage next year in honour of 'I'm Outta Love'.

The run will finally begin on September 18, 2021, in Switzerland, before heading to Rome, Berlin and Prague.

The UK leg includes a stop at London's Hammersmith Eventim Apollo on November 8, 2022.

The shows will mark the 'Masked Singer Australia' 2021 winner's first jaunt since her 2018 stint in support of her widely-praised LP, 'Evolution'.

Meanwhile, the 53-year-old singer recently insisted she views her health issues as a "gift".

The 'Left Outside Alone' hitmaker has battled breast cancer twice and also suffers from Crohn's Disease, but she's refused to let her health issues stop her from having a positive outlook on life.

She said earlier this year: "I found very quickly that if you dwell on any illness, it'll just fester inside you in a really negative way.

Shilpa Shetty has been cleared of "obscenity" charges nearly 15 years after she was kissed on stage by Richard Gere.

The Bollywood actress appeared with the 'Pretty Woman' star at an AIDS awareness event in Mumbai back in...Read More

Sydney Sweeney refused to do some nude scenes in 'Euphoria'.

The 24-year-old actress stars as Cassie Howard - a character haunted by her sexual past - in the HBO drama series alongside Zendaya, and she admitted that ...Read More

A 102-year-old magician has been honoured with an MBE by Prince William.

Henry Lewis received the honour from the Duke of Cambridge at an investiture ceremony at Windsor Castle on Tuesday (25.01.22) and celebrated by ...Read More

The 43-year-old star dressed as a nun to announce the launch of her new page on the adult subscription site, and the former glamour model, who is charging fans $14.99 a month to unlock her...Read More