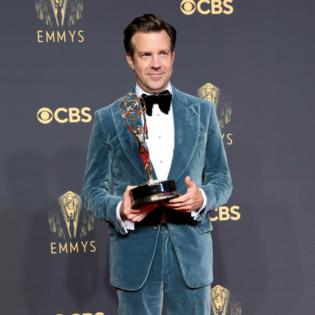 Jason Sudeikis has rekindled his romance with Keeley Hazell.

The 'Ted Lasso' star has seemingly got back together with the 35-year-old former glamour model after photos obtained by MailOnline showed them sharing an embrace while on vacation in Cabo San Lucas, Mexico, on Monday (22.11.21).

Keeley - who first met Jason while on-set for the 2014 film 'Horrible Bosses 2' and then worked together again when she got a guest spot on 'Ted Lasso' in 2020- was sporting a hot pink bikini while Jason had on blue and white board shorts and a red t-shirt that he whipped off to venture into the Pacific.

The pair hadn't seen seen together since September but an insider insisted at the time they were "just friends".

A source said: "It's not a romantic relationship."

In June, the couple were said to be dating but their romance wasn't "serious".

An insider said in the summer: "They've been dating for a little while now. They're just having fun. It's nothing serious at this point."

In February, Keeley and the former 'SNL' star sent tongues wagging about their relationship when fans noticed her Instagram posts had the same backdrop as the living room that Jason won his Globe Globe via Zoom.

Last November, Jason split from his long-term partner Olivia Wilde but they have kept things amicable for the sake of their two children, Otis, seven, and five-year-old Daisy.

An insider previously said: "It's been amicable and they've transitioned into a great co-parenting routine. The children are the priority and the heart of the family's relationship."

Olivia has moved on with former One Direction star Harry Styles, 27, who she met on the set of her film 'Don't Worry Darling'.

Vanessa Hudgens would "never want to be a royal" because she couldn't deal with the added "scrutiny" they endure.

The 32-year-old actress has played a princess in the three 'The Princess Switch' movies but has said she ...Read More

The Blink-182 rocker confirmed he was facing stage 4 diffuse large B-cell lymphoma in June this year when he posted a picture of himself strapped into a ...Read More

The 52-year-old singer released a new Christmas song titled 'Fall in Love at Christmas' last month, and has said her mission with putting the song into the world was to ...Read More

Little Mix are "taking a break" after 10 years together.

The 'Sweet Melody' hitmakers - made up of Leigh-Anne Pinnock, Jade Thirlwall, and Perrie Edwards - have announced they will be going on hiatus after their 'Confetti...Read More

The Little Mix star gave birth to twins in August, and when she attended the red carpet event for her big-...Read More

Donald Trump is planning to have a "very big" year in 2022, and "an even bigger" 2024, when the next US Presidential Election is due to take place.

The former President - who was succeeded by current President Joe Biden ...Read More