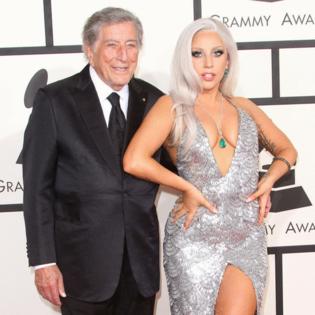 Lady Gaga has shared her delight at Tony Bennett, who has Alzheimer's, understanding her every word when she told him the news they are up for six Grammys.

The 'Stupid Love' hitmaker, 35, and the 95-year-old Jazz legend have been showered with nods for their acclaimed second duets album, 'Love For Sale', including the prestigious Album of the Year prize.

And the 'House of Gucci' star has been left "utterly speechless" after finding out they are up for several accolades for the follow-up to 2014's 'Cheek to Cheek'.

The duo are also in contention for Record of the Year for 'I Get a Kick Out of You', and best Pop Duo/Group Performance, Traditional Pop Vocal Album, Music Video, and Engineered Album Non-Classical.

Tony became the oldest artist in history to be nominated in the general categories.

In a lengthy statement on Instagram, Gaga gushed: "Thank you so much to the @RecordingAcademy for these 6 nominations for Love For Sale. I am stunned and shocked and beyond grateful. I don't know what to say. I just keep crying and am utterly speechless.

"This means so much to me, @itstonybennett, the Bennetts, my family, jazz music, and the great Cole Porter who wrote all these timeless classics. I'll never forget today and congratulating Tony on his 6 nominations."

On Tony's reaction, she continued: "I'll never forget that today he could track every word I was saying and understood the world was celebrating him and celebrating jazz - a genre that embodies the joy, abundance and imagination of Black music throughout history.

"Thank you to all the Grammy voters for recognizing me and Tony's dedication to jazz music and for also recognizing it in major categories where this music is often not nominated. (sic)"

The 'Born This Way' singer admitted there is no better feeling than the "love and partnership" they share - despite their 60-year age gap.

Gaga concluded: "This album happened because it was Tony's idea and I made him a promise that we would make it and we did.

"At 95 years old, he has more nominations than ever, I'm so honored to be his companion in music and his friend.

"Thank you to the public for loving us, we surely love each other, and you.

"Believe in love and partnership, even with 60 years between us, and Alzheimer's, there is nothing like the magic of music. I love you Tony, and the world loves you too. How could they not?"

Sir Billy Connolly has learned to "hypnotise" his hand to stop it shaking.

The legendary comedian - who revealed in 2013 he had been diagnosed with Parkinson's disease - treats his condition in the way he used to deal ...Read More

Blake Shelton has spent so much on Gwen Stefani's Christmas gifts, his bank thought he'd been a victim of fraud.

The 45-year-old star has gone over-the-top with presents for his wife this year because every year he tells ...Read More

Ralph Fiennes was delighted that Matthew Vaughn waited to release 'The King's Man' in the cinema.

The 58-year-old actor stars in the new movie - which serves as a prequel to the 'Kingsman' films - and was glad that the ...Read More

Gemma Arterton was "pinching herself" on a daily basis on the set of 'The King's Man'.

The 35-year-old actress stars as Polly in the new 'Kingman's prequel movie and revealed that she was struggling to keep her composure ...Read More

Brooke Shields says her 15-year-old daughter is going through an "a**hole" phase.

The 'A Castle for Christmas' star has opened up on the difficulties of raising her two teenage daughters, whom she shares with her husband ...Read More

Fans have been waiting a very long time for the follow-up to her most recent LP, 2016's 'Anti', which she has teased her fans about over and over again.