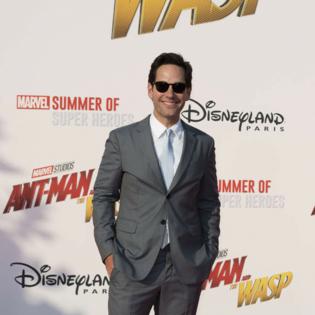 'Ant-Man and the Wasp: Quantumania' has wrapped filming.

The director of the upcoming third instalment in the blockbuster Marvel franchise, Peyton Reed, has confirmed principal filming has finished.

Alongside a piece of artwork of the titular superheroes, the filmmaker tweeted: "Principal photography on ANT-MAN AND THE WASP: QUANTUMANIA is now complete! Can't wait to show you all what we've been up to."

Paul Rudd is back as Scott Lang/Ant-Man and Evangeline Lily as Hope van Dyne/Wasp.

The director previously insisted that both characters share equal billing in the film.

The 57-year-old helmer said: "They're a partnership, and she's a very, very important part of that."

The 2018 film 'Ant-Man and the Wasp' was the first Marvel movie to feature a female superhero in the title and Peyton wants to find a balance between the genders in the genre.

He said: "That was a very gratifying thing, I guess technically we were the first Marvel movie with a female hero in the title of the movie. Finding that balance in that movie, that's very important to me because that's very much a men's playing field, historically."

Jonathan Majors is villain Kang the Conqueror and Kathryn Newton is making her debut as Cassie Lang.

Sir Billy Connolly has learned to "hypnotise" his hand to stop it shaking.

The legendary comedian - who revealed in 2013 he had been diagnosed with Parkinson's disease - treats his condition in the way he used to deal ...Read More

Blake Shelton has spent so much on Gwen Stefani's Christmas gifts, his bank thought he'd been a victim of fraud.

The 45-year-old star has gone over-the-top with presents for his wife this year because every year he tells ...Read More

Ralph Fiennes was delighted that Matthew Vaughn waited to release 'The King's Man' in the cinema.

The 58-year-old actor stars in the new movie - which serves as a prequel to the 'Kingsman' films - and was glad that the ...Read More

Gemma Arterton was "pinching herself" on a daily basis on the set of 'The King's Man'.

The 35-year-old actress stars as Polly in the new 'Kingman's prequel movie and revealed that she was struggling to keep her composure ...Read More

Brooke Shields says her 15-year-old daughter is going through an "a**hole" phase.

The 'A Castle for Christmas' star has opened up on the difficulties of raising her two teenage daughters, whom she shares with her husband ...Read More

Fans have been waiting a very long time for the follow-up to her most recent LP, 2016's 'Anti', which she has teased her fans about over and over again.