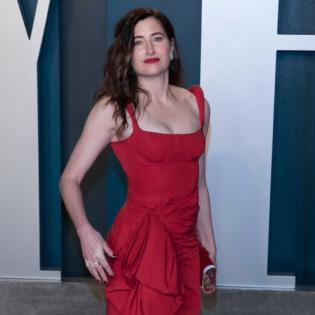 Kathryn Hahn will no longer be playing Joan Rivers in 'The Comeback Girl'.

The 48-year-old actress was originally cast as the legendary stand-up comic - who died in 2014, aged 81 - in the limited series, but the production has now been scrapped amid intellectual property issues.

Kathryn was actually attached to star in and executive produce the project, but Rivers' life rights - which are held by her daughter, Melissa Rivers - were never secured by the producers, according to Variety.

The project could have conceivably gone ahead as an unauthorised production. However, 'The Comeback Girl' wouldn't have been allowed to use the late comedian's catchphrases or jokes.

The planned series recently came under fire from comedian Sarah Silverman, who hit out at Hollywood for casting non-Jewish people in Jewish roles.

The actress - who is Jewish herself - criticised the lack of representation in major roles, particularly when the character's "Jewishness" is "front and centre".

She said: "There's this long tradition of non-Jews playing Jews. And not just playing people who happen to be Jewish, but people whose Jewishness is their whole being.

"One could argue, for instance, that a Gentile playing Joan Rivers correctly would be doing what is actually called 'Jewface'.

"'Jewface' - doesn't feel good to say - is defined as when a non-Jew portrays a Jew with the Jewishness front and centre, often with make-up or changing of features, big fake nose, all the New York-y or Yiddish-y inflection.

"And in a time when the importance of representation is seen as so essential and so front and centre, why does ours constantly get breached even today in the thick of it?"