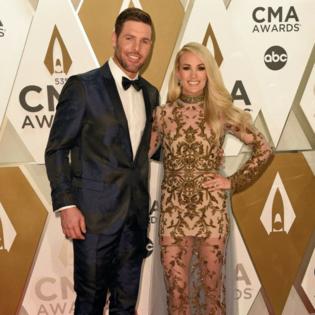 Carrie Underwood gets frustrated with her husband's belongings cluttering up their home.

The 'Love Wins' singer has revealed what really grinds her gears most about her partner Mike Fisher, and she revealed she isn't impressed with the ice hockey star's huge hat collection and love for taxidermy.

Alongside an Instagram video titled "Things I wouldn't put up with if I didn't love him", she wrote: "I must really truly love him... Who can relate?!"

In the clip, she put him on blast for his "dirty clothes on the floor", "dead things on the wall", "so… many… hats" and even his dog, Zero.

The tongue-in-cheek clip was soundtracked by the country star's new single 'If I Didn't Love You'.

In 2020, the couple - who have been married for 11 years after first meeting at one of her concerts in 2008 - gave an insight into their marriage in the documentary series 'Mike and Carrie: God & Country', and the former 'American Idol' winner revealed they "learn" from one another.

She explained: "We learn from each other and have spirited discussions about things that we disagree on, but at the end of the day, we love each other very much."

A key point of contention for the couple - who have sons Isaiah, six, and Jacob, two, together - is their attitude to hunting, with Mike being a firm fan while the 'Jesus, Take the Wheel' singer is very much not.

She said on the show: "I love animals and I love life so much that I swore I would never marry a hunter -- not in a million years."

However, the former Ottawa Senators player suggested their ability to find common ground comes from their faith.

He added: "It's a centre ground that's the most important thing around everything. There's always a way and it's always God working in it."